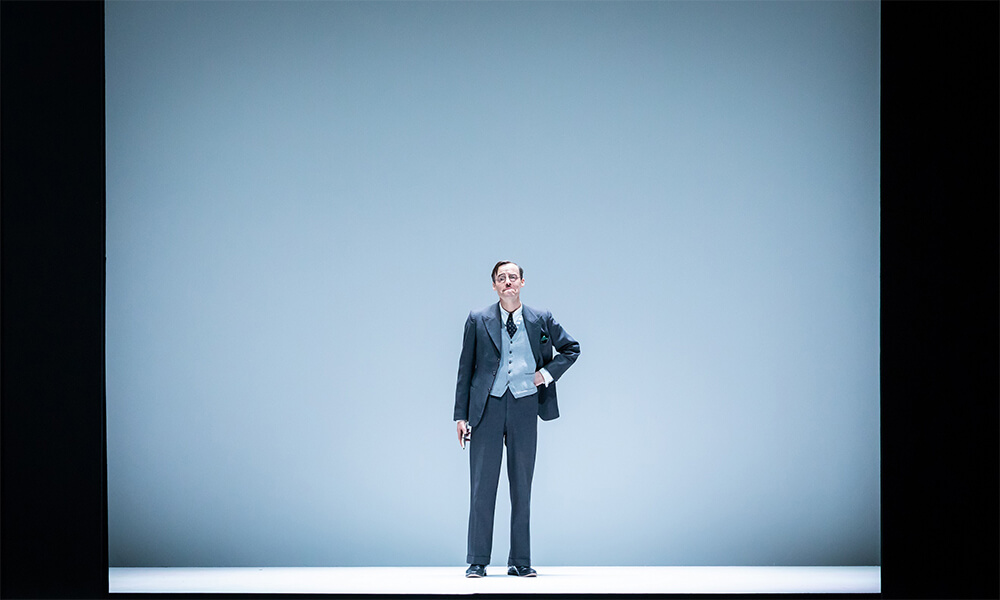 I read the play in one sitting and had to literally scrape myself off the floor afterwards! Paul Hilton as Morgan in "The Inheritance". Photo: Marc Brenner

On my last visit to The Inheritance (which may have been the third or fourth time. who's counting…) I brought a friend with me; she'd heard so much about it that she repeatedly asked me to take her. As the first Act came to an end, following a monologue by Walter [played by Paul Hilton], she turned to me in tears and said, "wow!". We looked around us as the lights came up, and she certainly wasn't alone. Not a single eye remained dry.

Due to rave reviews and an overwhelming demand for tickets during its Young Vic Theatre run, The Inheritance was recently transferred to Noel Coward Theatre in the West End. Spread over two parts, 3.5 hours long each, The Inheritance sucks you in from the get go. It begins with a group of young gay men who ask their mentor, Morgan [also played by Paul Hilton], for help in writing their story, but, soon enough, this story takes a turn, pacing between the painful past of the gay community during the HIV crisis, and all the love, hope, hardships and humanity of their world today.

Returning to my impressed friend, despite the length of the play, she said to me at every single interval, "I wish they didn't do this. I want to keep watching. I don't want to leave." And that seems to sum it up best; it will crush your heart just as well as it will make you burst with laughter.

Most recently seen in the brilliant BBC miniseries A Very English Scandal (2018), Royal Court's Anatomy of a Suicide (2017) and National Theatre's Mosquitoes (2017), Paul Hilton went on to play both Morgan, who's in fact closeted novelist E. M. Forster, and Walter; perfectly delivering the wisdom of the first, and the compassion and fragility of the other. I had the immense pleasure of speaking to him during the Young Vic run (the interview can be found here), but certainly there was much left to say and more so since the transfer was announced and opened, bringing this extraordinary play to many more, diverse audiences… 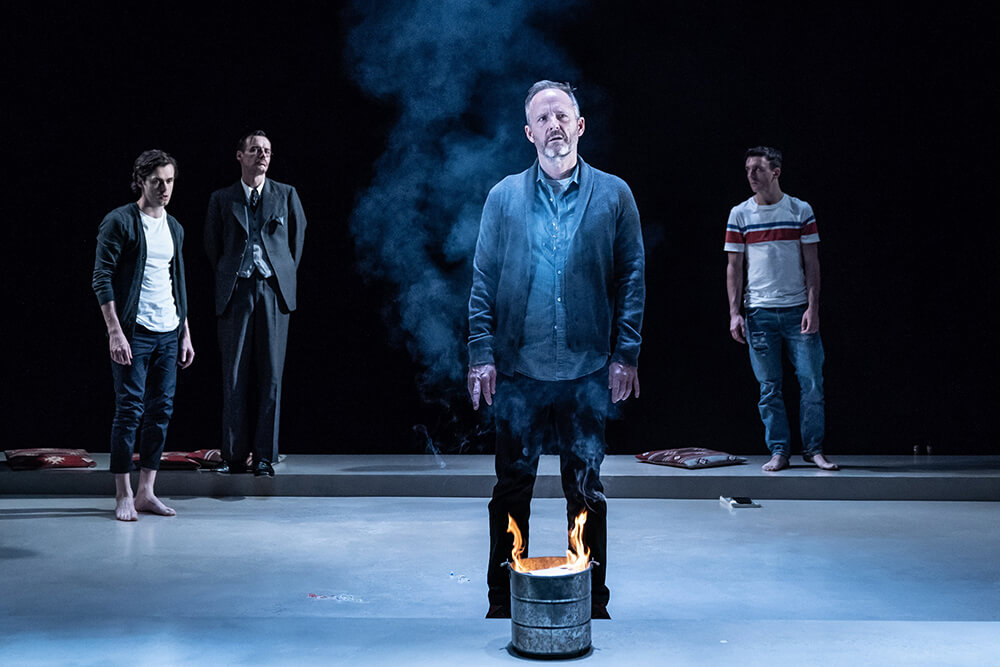 When I asked if you were going to be in the West End transfer, you responded, “it’d be crazy not to.” What makes The Inheritance so special? And did you expect it to be this way when you first read it?

“Yes. I knew that this was a very, very special piece of writing given that my currency in this business is words and scripts; I’ve read thousands of them… But there occasionally is a script that has a profound impact, and this was one of them. I read it in one sitting and had to literally scrape myself off the floor afterwards!

"I knew it was special and I knew that that would be communicated if the right ingredients were in place, the right cast, the right director, the right vision. And it seems to have created its own momentum in a really extraordinary way, which is bewildering and kind of mystifying to all of us, including the writer.

“We’ve all talked about this play having a life changing impact on us, in many ways. For me, I suppose it connects to something that Eric says at the end of the play, after he’s reached this point of realisation. He says that he wants to feel things. In a world that is so muted, I think, that message alone, is profound for our times. And with that, also, the wisdom of knowing that grief and pain and loss and heartache and jealousy, are all part of the pallet of experience.”

There are quite a few plays about the gay community out there, how is The Inheritance different?

“I think firstly because of the scale of the piece. Because it’s 7 hours, there’s room for a lot more detailed exploration of character, of thought, feeling. Every area of the play can be explored more deeply, more thoroughly, therefore an audience can invest more in the plot.

“The depth of the world that Matthew [Lopez, playwright] has drawn is so vivid, the characters, the language, are so vivid. The feelings of being boxed in, being oppressed, categorised, isolated, threatened, rejected, disconnected from the larger populace, all these things are being explored and examined, at a time when the world really needs to take a long hard look at itself.

“It is an incredible, intense and insightful piece about the human experience, aside from just addressing sexual equality, it’s dealing in a very profoundly compassionate way with how we live in the world together, and that’s a very rare and precious gift to the world.” 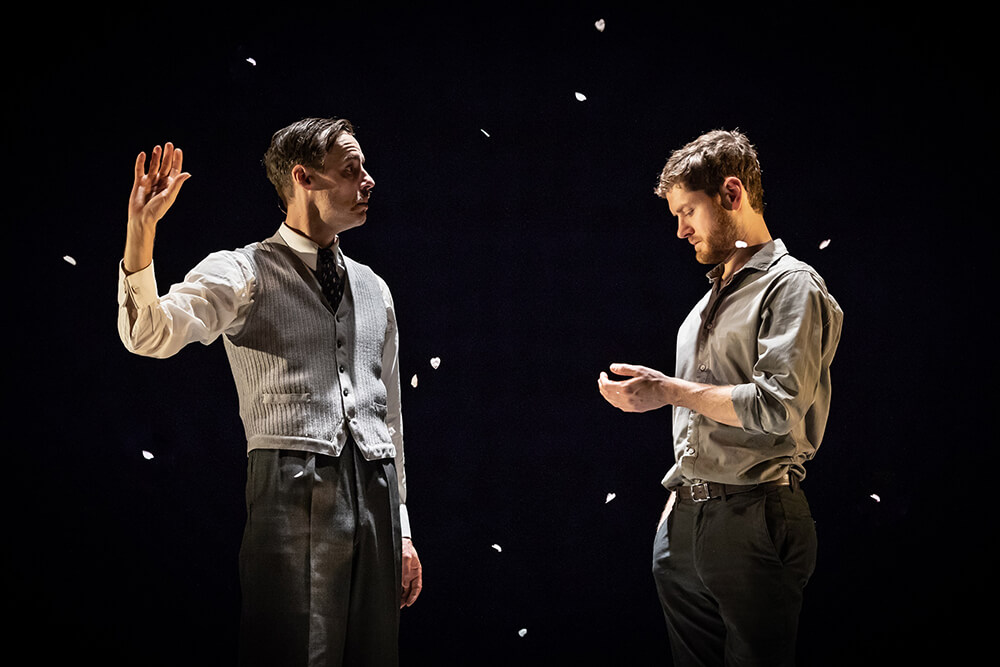 "I think the part that I want to play next isn’t quite written yet!" Paul Hilton as Walter with Kyle Soller in "The Inheritance". Photo: Marc Brenner

Whenever I’ve seen you it felt like you become more invested in your characters than most actors. Baring that in mind, what would you say is your ideal character to play?

“I’ve never been an actor who has any compulsion to play Hamlet, or the Scottish king. There are no roles that I particularly earmarked for myself as desirable or, kind of, zeniths of achievement.

In more recent years, I’ve found myself in work that’s either new or original, and is being coined for the first time. That’s the work that really excites me and interests me. To be able to create, if you like, from the sperm and the egg, to the death, that’s the most exciting thing.

“There is always an element of reference to other productions, other plays, other actors when you’re playing characters that have this extraordinary lineage like Hamlet or the Scottish king, that’s inevitable. And that’s not a bad thing, that’s a wonderful thing. But, for me, I’ve always been much more interested in new work… And so I think the part that I want to play next isn’t quite written yet! [laughs] I think it’s in the air, but it’s not been written yet.” 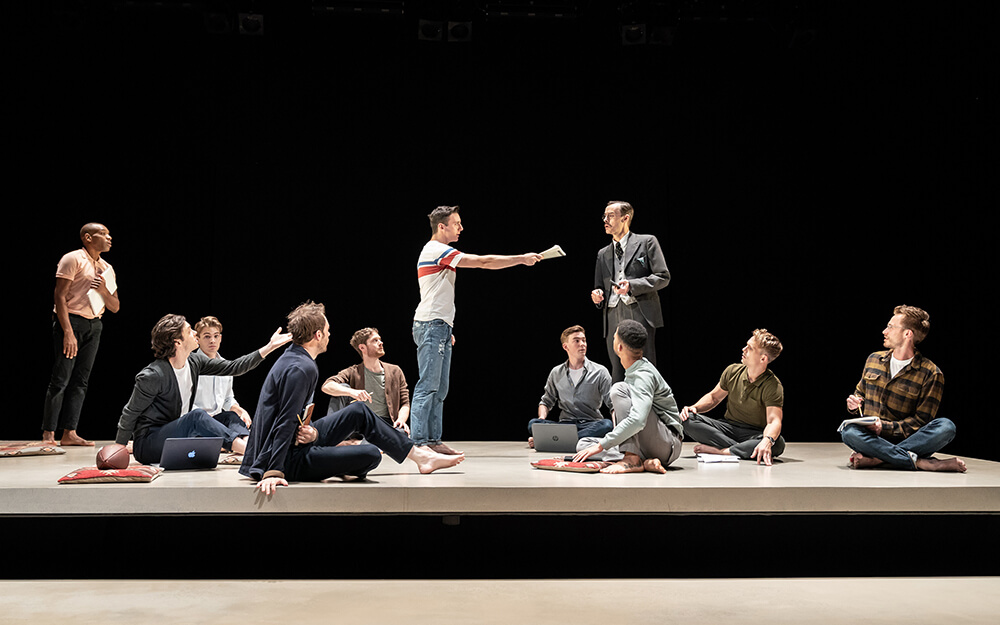 "By playing out these fantasies or fears or desires, we expiate them, and we come to a greater understanding." Paul Hilton as Morgan in "The Inheritance". Photo: Marc Brenner

What is theatre’s role in society? Is it succeeding in achieving it?

“I was always astonished by the fact that right next to Epidaurus [ancient Theatre in Greece] is the Temple of Asclepius where people would go to be healed from mental or physical illness and trauma. There was this belief that the community, society, and medicine and healing, were intrinsically and holistically connected.

"One of the rituals in that Temple was that a non-venomous snake would be released into a darkened room at night when they were sleeping, and the person who was wrestling with their demons, either psychological or physical demons, would be alone in the room with this snake. Not dissimilar to a play unfurling itself in a darkened auditorium followed by a new dawn. New insight.

“It's a well known fact that theatre and mental health are linked. And based on my own experience of being a young person, in a community, who felt isolated because I felt different, because I had different interests, because I didn’t follow a certain pack mentality; I know for a fact that, for me, drama was my saviour. Drama allowed me to explore aspects of my psyche, aspects of everybody’s psyche, that I would otherwise not have done or had that opportunity to.

The Inheritance is on until 19 January 2019 at Noel Coward Theatre.