It's possible to transcend your social status: Interview with Paul Hilton 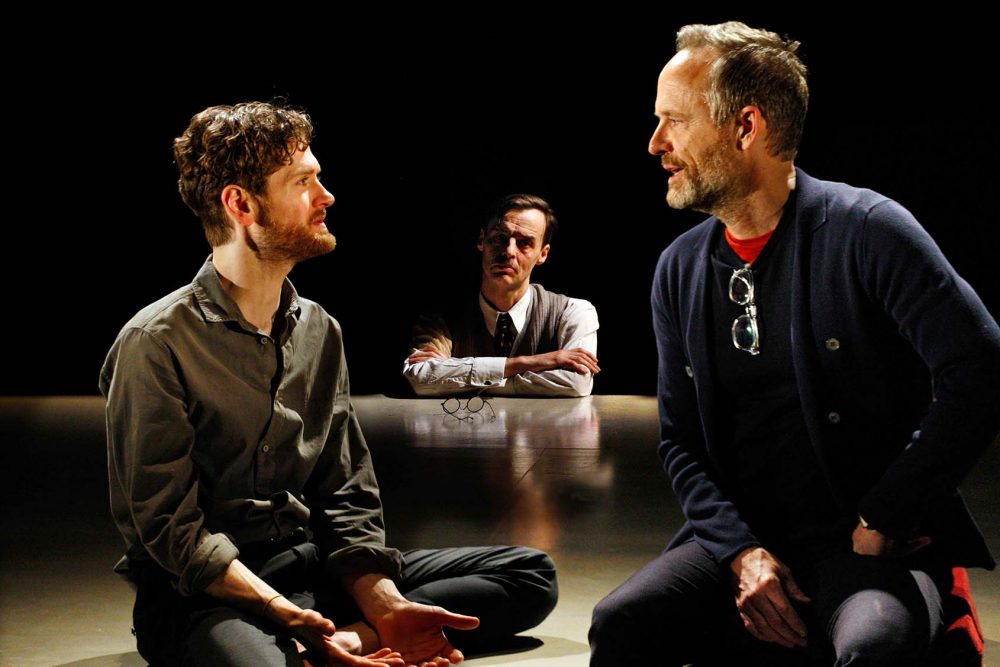 What the play is ultimately trying to touch people with is that notion of love is love. Paul Hilton (centre) as Walter in "The Inheritance", Young Vic. Photo: Simon Annand

With an extremely impressive list of stage credits, Paul Hilton most recently appeared in Royal Court Theatre’s Anatomy of a Suicide and National Theatre’s Mosquitoes. He’s also done several musicals, including National Theatre’s Peter Pan, and Dr Dee (English National Opera) and wonder.land (National Theatre), both by director Rufus Norris and Blur frontman, Damon Albarn. Paul's most recent film work was on Swansong (2015) and Lady Macbeth (2016), and he will next be gracing the screen in the upcoming Stephen Frears' TV series, A Very English Scandal (BBC), starting in May.

Paul is currently in Young Vic's The Inheritance, which brilliantly tells the story of the HIV crisis and its legacy (or, if you may, its “inheritance”) for the gay men of today, and combines this motif with themes from novelist E. M. Forster’s life and his novel, Howard’s End. Forster, who was closeted until his death, is also used as a character in the play, simply named, Morgan (after Forster’s second name). Morgan is a would-be “mentor” for a group of young gay men, who may very well represent the entire modern gay community.

Paul inhabits the characters of Morgan and Walter; it is through him we learn most about the magnitude of the HIV crisis, the loss and pain, and he does so with such incredible humanity, fragility and love, that it is impossible to remain indifferent.

Mostly private and elusive, Paul admitted he rarely agrees to be interviewed, so I’d like to admit, I feel very fortunate to have this chat with him.

How has the experience of playing a gay character been for you?

“Never have I been more aware of my sexuality during a show, but I’ve also learnt I have this intense resistance to being put into a 'box'. Like Forster, I think he’s quoted as actually saying, ‘I never did find a box to fit me’. Particularly in this day and age, I don’t feel comfortable calling myself heterosexual. The times are so fluid. My children who are teenagers now have grown up in a world where sexual preference or any sexual orientation is acceptable, and what the play is ultimately trying to touch people with is that notion of love is love.

“But, that said, on the practical level, it has been incredibly liberating to spend time with gay men who have opened themselves to me… Their hearts I mean, I should be explicit about that!… If I was to not meet that with my own level of engagement, I would be failing the show. So, as far as I’m concerned there’s no distinction between playing a gay character and a heterosexual character. It’s love.

“I have played a homosexual character in the past, and enjoyed the fact that I can step into that world without, in most cases, provoking any questions. I fit very comfortably into that world ‘cause I have been surrounded by gay men in my life. I have a lot of friends who are gay. It’s not been an enormous leap for me.” 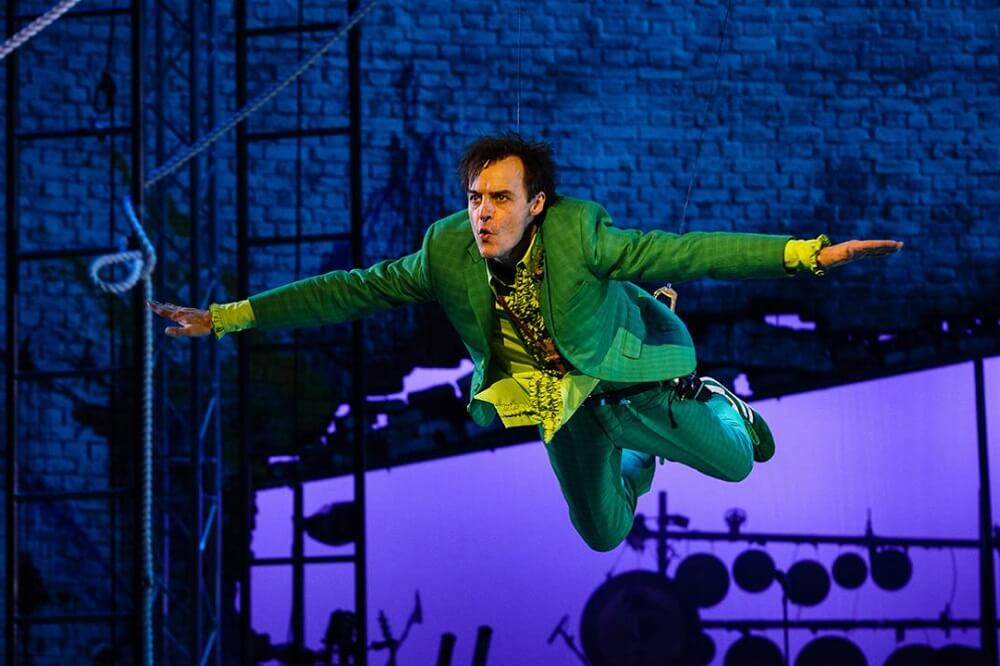 "Like a lot of actors that I know, I’m a frustrated rock star." Paul Hilton in "Peter Pan", National Theatre. Photo: Steve Tanner

"I see myself, in Peter Pan, when I’m on the skip there, like I was in Glastonbury. That was my Glastonbury"

You’ve worked with Damon Albarn twice. What is the relation there and have you done any musical training?

“Dr Dee was the first thing I did with Damon, that was a situation where I replaced Bertie Carvel, who’d done it in Manchester. In the original production, the character of Dee didn’t sing. When they wanted to bring it to London they decided they wanted to work on it, and also give Dee a voice… Bertie can sing very well. But, I think by that time he was probably contracted to do something else. But also the dynamic was quite different. Bertie and I are two very different people, from very different worlds, with very different approaches.

“I’d known Rufus [Norris] a long time. Rufus had known Damon and thought that I would get on with him… I have an affinity with Damon. I’ve worked with Rufus a lot so I know him very well, I trust him, I would do anything for him. It’s a combination of those ingredients.

“In terms of the music, I think like most, well, a lot of actors that I know, I’m a frustrated rock star. I see myself, in Peter Pan, when I’m on the skip there, like I was in Glastonbury. That was my Glastonbury. So on those vicarious opportunities I get to work with Damon or with rock musicians or on extraordinary pieces with orchestras, that’s just ticking all the boxes that, for me, are about that alternative career that I didn’t quite make. I’m vicariously living those dreams in musical theatre world.” 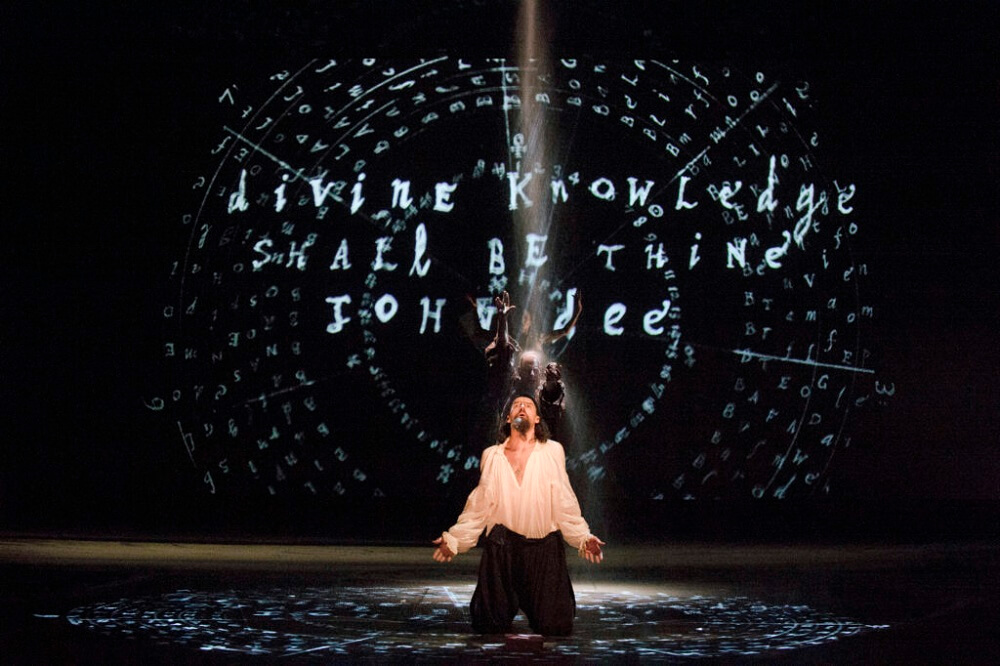 "You can be whoever you want to be. As long as your self-belief is intact, and you have love in your heart." Paul Hilton in "Dr Dee", ENO. Photo: Richard Hubert Smith

"Young people need to spend time in the theatre… Learning how to express themselves. It’s crucial for young people’s mental health"

If you could change one thing…

“There’s lots of things I’d love to change about this business. All my work is always an attempt to address equality and love, in all its forms. I’m from a working class environment, playing people who are moving higher to the upper class environment. I think I’m a kind of living proof and testament of the fact that it is possible to transcend your social status, whatever you’ve been given, and be whoever you want to be.

“I had nobody in my family who was connected to the theatre. But I went into a theatre at an impressionable age. I was taken there by a drama teacher in a comprehensive school, who is still introducing young people to theatre every single day. He’s responsible for putting hundreds of people into this profession because of his passion and love for drama, which he gave to working class people, and that is slowly being taken out of the curriculum.

“Arts and drama subjects are being taken away. Working class actors, there’s no opportunities for them… I suppose if I was gonna give any advice it would be, you can do it. You can be whoever you want to be. As long as your self-belief is intact, and you have love in your heart.

“Arts subjects need to be for all schools, for all children. Young people need to spend time in the theatre, and with actors, workshopping, learning how to express themselves. It’s crucial for young people’s mental health, and I know that ‘cause I have two teenagers."

Mental health. And democracy as well…

The Inheritance is on until 19 May at Young Vic Theatre.
*** Update: The play was transferred to Noel Coward Theatre – purchase tickets here.

Also for The Inheritance, read my interview with Hubert Burton.