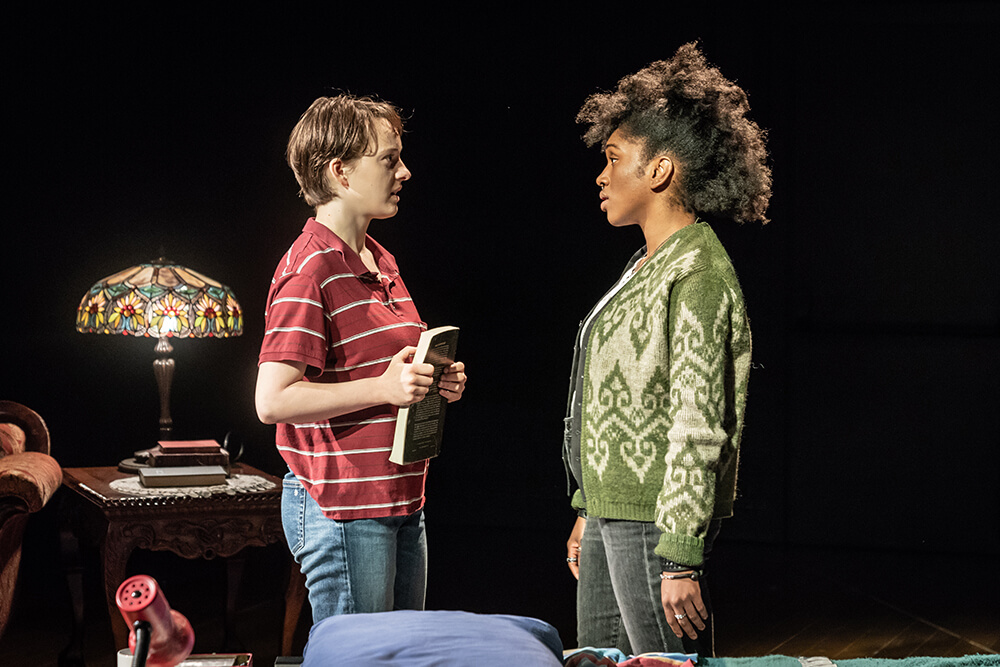 Cherrelle Skeete made her professional debut in Lion King (West End) and later in the critically acclaimed Amen Corner (National Theatre). Her next National Theatre performance soon followed with Three Days in the Country and since then she starred in the original cast of Harry Potter and the Cursed Child (Palace Theatre), as well as in The Seagull (Lyric Hammersmith) and in The Phlebotomist (Hampstead Theatre). On screen she appeared in Doctors (BBC One) and in Silent Witness (BBC One) amongst others.

To support self identified black women creatives, Cherrelle is the founder and artistic director of the organisation Blacktress UK. Blacktress holds monthly meetings of support for black actresses, as well as large open events to promote diversity and inclusivity.

Her current work on Young Vic Theatre's Fun Home seems particularly important for her. The new musical is based on a brave graphic memoir by cartoonist Alison Bechdel (the inspiration for the well-known Bechdel test, which ranks films according to their representation of women). Playwright Lisa Kron and composer Jeanine Tesori adapted the comics story of Bechdel's coming out, and the tragic story of her closeted father's suicide.

The musical opened to critical acclaim in the US, and won five Tony Awards (including one for Best New Musical). Its UK premiere at Young Vic Theatre drew similar loving reaction. Cherrelle wonderfully portrays a rebellious Joan, a young queer woman who meets Alison in the 80's, just as she reaches adulthood. Joan inspires Alison to confront her sexuality and coming out.

I previously saw you sing in Three Days in the Country [National Theatre], but I've never seen you in a musical before…

“I’ve always been an actress that sings. I’ve always been able to. I was in a folk band before I went to drama school. The first musical that I did on the West End was the Lion King [Lyceum Theatre], and that was my baptism of fire [laughs]. It was my Masters in musical theatre just because, that show has been running a very long time for a reason. The creatives on that show worked the cast so hard and it’s a really intensive casting process. The standard is so high.

“That was how I learnt about my voice and what my voice could do. It couldn’t do it at the time but by the end of rehearsals, it had to! I was a swing so I covered all the female vocals in the ensemble, and some of those girls can sing high and my voice, I was always told I was an alto, which isn’t true. It’s a muscle that you can stretch but no one’s really taken the time to see what my voice can do.

“After that I did Amen Corner [National Theatre], which is not a musical but it’s a play with music. That was a very special show! I was so honoured to be in that room. Everyday we got to sing gospel music which is so rich and heartfelt and raw. We got to work with London Community Gospel Choir. I was just around phenomenal singers. From that I learnt how to act through song. Everything was stuff I picked up along the way.” 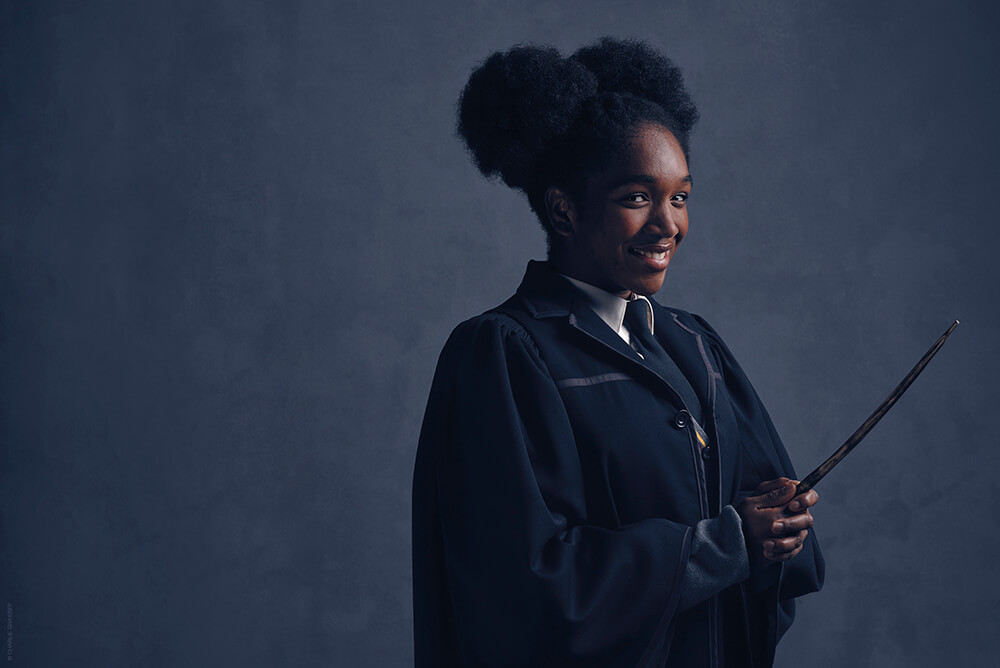 "Reading the script, I’ll always question who’s written it, whose view point is it, and why are they telling the story." Cherrelle Skeete was in the original production of "Harry Potter and the Cursed Child", Palace Theatre. Photo: Charlie Gray

You mentioned the subject of the play is very close to your heart. Did you find it more challenging because of it?

“If I’m honest I was scared. I think there’s an image when we see queer characters, they’re seen in a particular light. I suppose, because I look quite fem, I worried I would look too heterosexual for the part. So, that was one thing I said to my partner, ‘I don’t know if I’m gay enough for this part.’ And I thought of all the girls that I knew that I would cast in my head… I was really surprised when I got it.

“In the comic book, Joan was played by a white lady. So I said to the writer, Lisa Kron, ‘my Joan reads Audre Lorde [writer and activist], you know that?’ [laughs]. She said yeah. What’s been amazing for me is, I feel that of all of the characters I’ve got a bit more free rein. Because, my character is based on, obviously, the graphic novel, but because I’m playing it, I’m bringing my demeanour, I suppose. And obviously the character I’ve created as being Joan… Is not a white woman from Iowa [laughs].

“Obviously it’s Alison [Bechdel]’s story, but it also opens up the whole kind of question of black queer people in the 1980’s. I knew that the black people that would come and watch the show, that wanted to feel as though they were represented in some way… ‘What is Joan doing,’ ‘what is her experience,’ obviously it would be very different to Alison’s.

“I suppose with any role, no matter how big or small, just honouring and doing the character as much justice as possible. And with this, I kind of wanted to have a level of transparency with my own queerness; you usually don’t get the opportunity to talk about it. It’s nice to be able to talk to queer people who do watch the show, and to hear them respond to Joan with, ‘yes, I do know what that feels like.’ It’s intergenerational conversations.

"My friend that came to watch, she’s in her 50’s, she identifies as a Lesbian and she’s from the Caribbean community, and an actress as well. And she was straight away thinking that the scene between Joan and Alison getting it on for the first time, that ‘oh my gosh I know what that was like!’ so it’s great I get to be that connection."

Have you ever refused a role because of stereotypical or racist representation?

“Yes I have. I probably even refused the audition to be honest. Just reading the script, I’ll always question who’s written it, whose view point is it, and why are they telling the story. People write things for different reasons, and because of the ‘d word’, the diversity word, it’s quite fashionable now. Sometimes it’s progressive and sometimes it’s actually going the opposite way; the story ends up being in the wrong person’s hands. 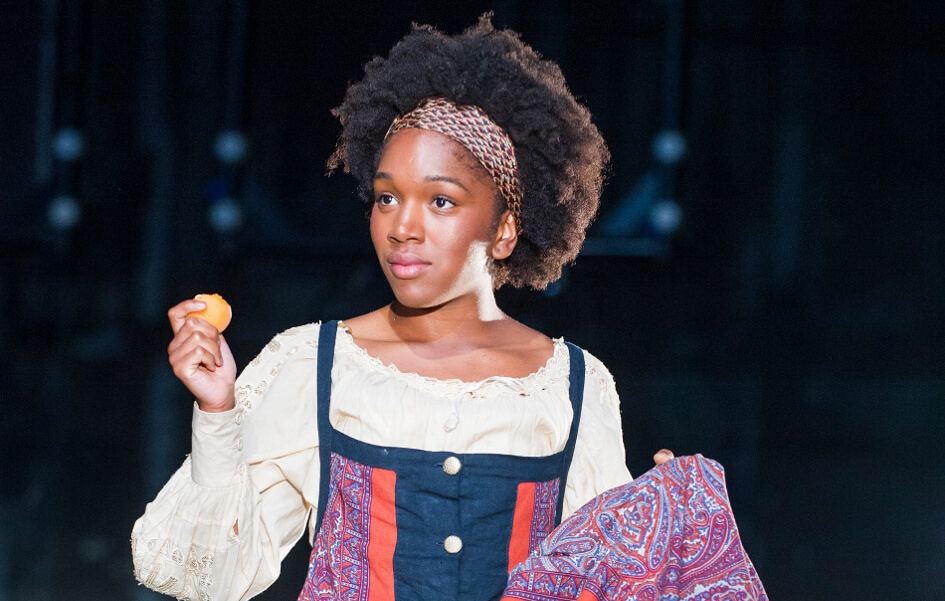 "In regards to things being more correct, I think it happens more in theatre than on screen." Cherrelle Skeete in "Three Days in the Country", National Theatre. Photo: Tristram Kenton

Do you find representation is generally better on screen or on stage?

“An older actress said to me that some of the TV roles that she’s been given, which she’s so grateful for, have been amazing. But it’s almost like they’re a starter, an amazing starter, while everyone else has got a full course meal. But you as the actor that you are, you’ve got to make it last, and make it suffice you for a full course meal.

“Some of the stuff that I’ve seen on the script I thought, ‘okay you’ve not really thought much around this character. It’s kind of underwritten, but that’s my job. I’ll try and add a character arc.’ So the screen stuff, you need to honour your character and give her presence, whatever that is. In regards to things being more correct, I think it happens more in theatre than on screen."

Tell us a bit about Blacktress UK.

“We’ve been running for a year. We put black women first, but we also host inclusive events. We had a screening of Black Panther in February at the Peckhamplex, it was full; like 400 people arrived. We’re actually in partnership with The Actors Centre and we also had an event for International Women’s Day there.

"We’re hosting our first season of the John Thaw Initiative at The Actors Centre. It’s basically a season of scratch nights, led by black women creative. We also welcome audiences as well. It’s fresh theatre that people are working on before it heads to Edinburgh Fringe Festival next year. Tickets will probably go on sale September-October. For now all info is at blacktress.co.uk”

Fun Home is on until 1 September at Young Vic Theatre.