I should do a role that slightly panics me: An Interview with David Morrissey

David Morrissey talks about his role in Julius Caesar, acting and his work with refugees 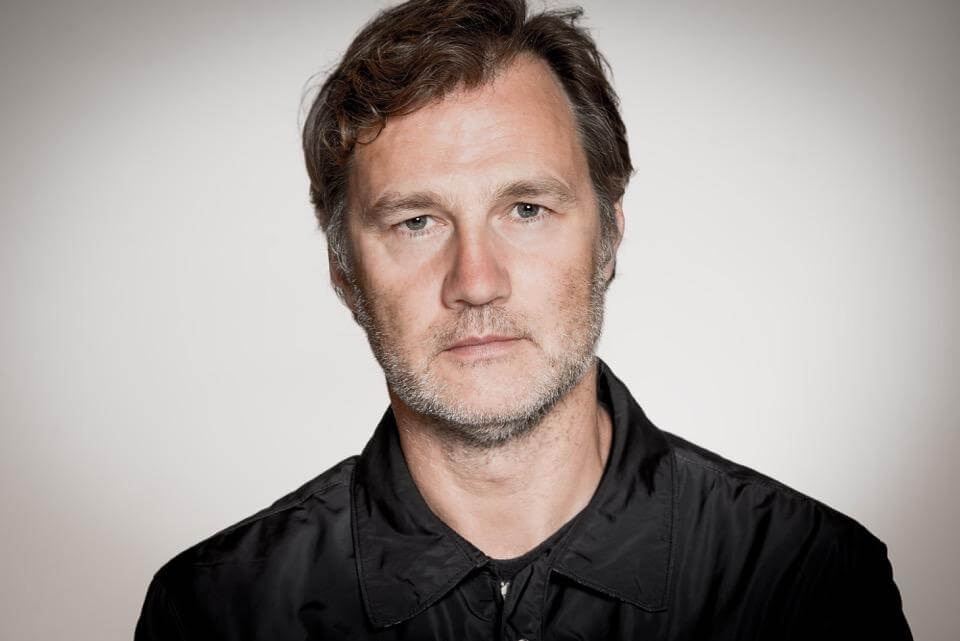 If I look at a role and it frightens me - that’s what I should be doing. David Morrissey. Photo: Robert Workman

The Bridge Theatre’s doors have opened and the crowds slowly make their way out from the theatre into the foyer, among them two large groups of schoolchildren on a day trip to watch the matinee of Julius Caesar. A few stand by me, and as they wait for their classmates, they begin a mock-battle in the busy foyer, still high on adrenaline from the show.

The play starts with a support rally and familiar-looking red hats decorated with the word “Caesar” are sold to the mob. Needless to say, it ends with a bloody battle.

Just as one of the kids falls, another of their more “grounded” friends turns up and asks “who did you like the most?” quickly creating a clear divide between “Camp Brutus” and “Camp Mark Anthony”. Neither side seemed to be able to convince the other to switch. 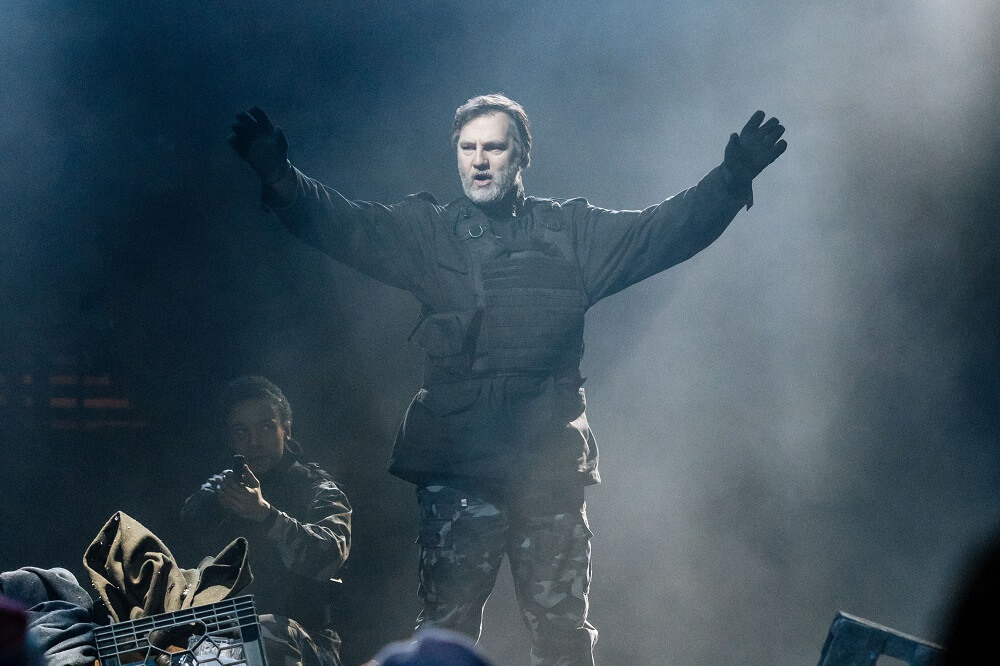 The speech that changes everything

That is a job that David Morrissey does particularly well as he delivers Mark Anthony’s passionate speech at Caesar’s funeral. All eyes are transfixed as he sways those who, up until a moment ago, saw him as the villain.

“It’s when the play turns. People have asked me if I was intimidated by it or if I was worried, but, and it sounds terribly arrogant and I don’t mean for it to be, but it’s the fact that I knew that nobody’s ever heard me do it and nobody has seen this production before. So that gives you license to experiment and have fun with it, and just the whole way that our production is means that it’s got to be different”.

The innovative staging of the production makes this Julius Caesar somewhat immersive. The stage changes shape and location at every scene, and the audience, who act as 'the mob', are turned to it each time by actors, technical team and ushers. Some of the audience lean against the stage or even rest their arms on it.

The stage is particularly small during this scene and you’re given the daunting task of changing the mob’s mind.

“I think that for Anthony and for the play… The play sets up Brutus as a very humane, liberal person. It sets him up as a real thinker with a great conscience. Then he commits this act of murder, whether you feel it’s justified or not, it is murder. So the audience are on his side, they’ve heard his argument, and then I turn up and I give the counter-argument. I do often feel the audience go ‘oh, whose side am I supposed to be on now?’ and that’s exactly what you should do.

“Shakespeare wrote the play at a time when Elizabeth I was on the throne and she was not very secure on the throne at all. There was a man called the Earl of Essex and he had a really legitimate claim for the throne, he had an army and he could have created a civil war very quickly. It could have gone either way. It was a cautionary tale, in a way”.

To get the audience there, Mark Anthony needs to be very charming.

“The thing that I discovered and that I liked is that he’s not a public speaker until he has to be a public speaker. He’s not up there and talking all the time like Caesar is. Caesar is used to it. What Anthony discovers in that funeral scene is that he’s good at it. He can talk, he can be it. But he discovers that in the moment, I don’t think he has that before that scene”.

Of course he’s not a very nice person, but is there an aspect of Mark Anthony that you can relate to?

“Oh yeah. The fact that his friend has been taken away from him and killed, the fact that there [are] people who he thought were very close and betrayed him. The idea that you feel you’re in a gang, in a political ideology or whatever, and somebody’s gone against you without any debate. Lots of those things I can relate to. He feels that people have acted with gross violence, with real violence, and he feels that it is not justified, and then what he does is he becomes corrupted by power himself and acts in a very violent way.

“What I like about all the characters is that they’re very complex. They’re neither one thing or the other. No one is the ultimate 'goodie', no one is the ultimate baddie. You can feel for them. That is very human, it is very… People have their faults and their foibles and their, sort of, complexities, and that’s what in this play”. 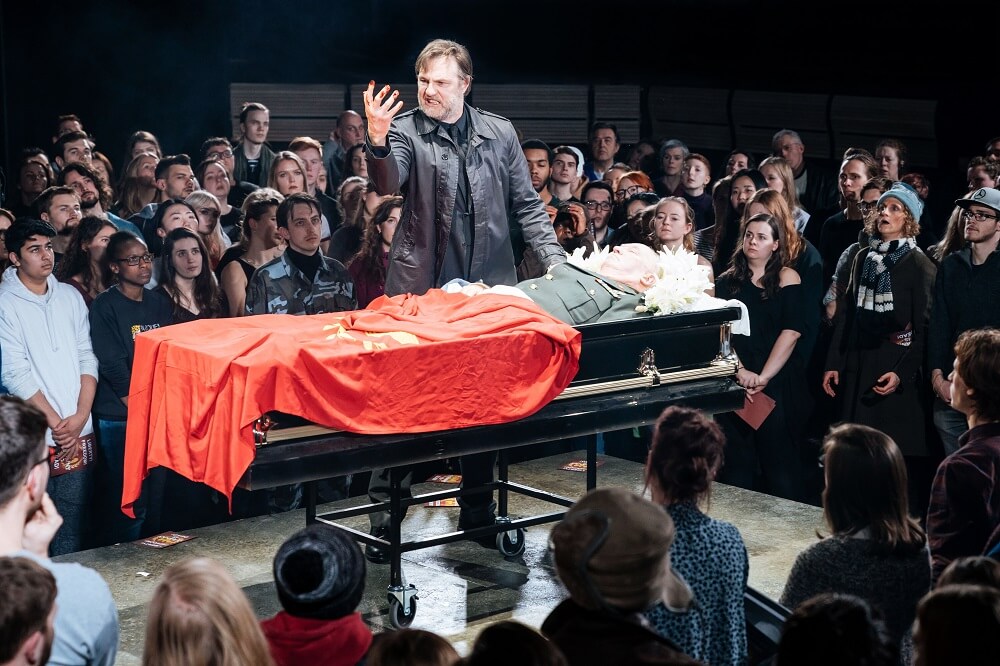 From Hangman to Britannia

While still enchanting mobs every night in Julius Caesar, David is also gracing the screen in Britannia (Sky Atlantic) as Aulus Plautius, the Roman General charged to lead the conquest of Britain, and in April he’ll be starring as Inspector Tyador Borlú in fantasy-thriller mini-series The City & The City (BBC Two).

On stage, he last appeared in Martin McDonagh’s dark comedy Hangmen (2015) at the Royal Court and its transfer to the West End. He played Harry Wade, an executioner who is forced to deal with the abolishment of hangings. The play had just transferred to New York.

You had to pick between doing Julius Caesar and going to New York with Hangmen. What makes you pick a role? Is there a certain trigger?

“Yes. I think that the real trigger for me is that it’s different from the character I played last time. I look for a challenge, I look for a real sense of… Something different, something… If I look at a role and it slightly panics me, or frightens me, then I should do it. That’s what I should be doing. That’s the thing for me. I get bored quickly, I get distracted quickly, and I think I need to be challenged. And what’s the great thing about Julius Caesar, and Hangmen as well, is that every night it challenges you, it just challenges every night. I never walk on stage and think, ‘oh I can just coast this’, and none of us do. You think ‘I’ve gotta bring my A-game to this’. So that’s the great thing. That’s what I look for in a part all the time.

Outside of the acting world you’re a Goodwill Ambassador for the UN Refugee Agency. Is there any advice you can give to those who want to help?

"Yeah, there’s lots of organisations out there. The organisation I work for is the UNHCR. And what was really amazing was, when I went to Greece, was seeing that crisis was happening very quickly, and just seeing people organising themselves in order to give help. A lot of the people who own tavernas in Lesbos have turned themselves into this sort of charity where they were helping people, they were giving out food, but they were also giving out bedding, and stuff like that, shelter. Giving out instructions about how to… Carry on, where to go to next, how to get to Athens. So…

“There’s lots of places and I think it’s just important that everybody is trying to help people without condemning them for the circumstances that they find themselves in, which is no result of themselves at all. In Syria it’s a civil war, and a lot of people are the victims of that… That’s where we are”.

Julius Caesar is playing at Bridge Theatre until 15 April.