We need theatre to understand who we are: Interview with Michael Gould 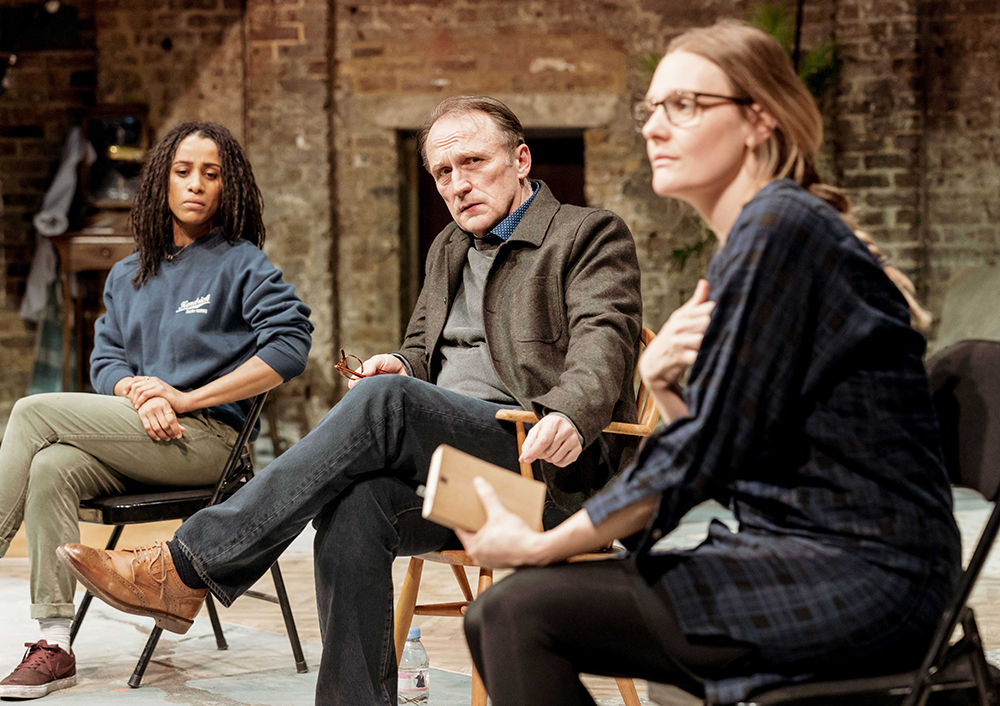 The Director, who I play, is pretty much an archetype of power and authority and patriarchy. Michael Gould in "The Writer", Almeida Theatre. Photo: Manuel Harlan

Michael Gould’s professional stage career began with the classics, in plays by Royal Shakespeare Company. But on his journey from Hamlet to films like Star Wars: Rogue One and The Darkest Hour, there are many gems. Michael is happy to say he’s proudest of the pieces he’s been in that he finds most profound, such as, Our Class (National Theatre), Pressure Drop (Wellcome Collection), the critically acclaimed The Jungle (Young Vic) and A View from the Bridge (Young Vic/Wyndham’s Theatre), and currently, The Writer (Almeida Theatre). As Michael describes them, all works with strong political content.

The fantastic play by Ella Hickson, The Writer, tells more than a personal story. It is probably best described as a play about the power struggles the playwright faces within the theatre industry, trying to protect their piece, and the power struggles women face daily. The Writer (portrayed by the wonderful Romola Garai) seems to finally gain her control and strength when she is in a sort of “wilderness”, but does power, and fighting for it, ever really go away?

Michael plays the character of the Director, a stern figure who will only accept things if they go his way. With his brilliant performance as this rather intimidating man, it was surprising to find Michael as approachable and as open-minded as he is, and frankly, quite the polar-opposite of the Director.

The Writer is very unique in its structure; did you find it harder to work on compared to “classic” plays?

“No. One of the key things about this is, it’s set in the place where I’ve spent most of my last 30 years; rehearsal rooms and theatres! So, I’ve done, say, a Chekov play with Katie Mitchell [theatre director] and we did a lot of backstory improvisation where we really have to research and know our stuff about Russian peasant farming in the 19th century. The process was to get it in your bones, into the fibre of us, as characters. So that was kinda hard.

“The hardest thing about The Writer for me was to stop telling anecdotes… We all know the world so well and we’ve all got our funny stories to tell. It was just finding a way to settle what version this is of what we’ve been in in the past. When you put that to one side and you start looking at what the play is, you realise that, to some extent, theatre is used as a metaphor for the power structure in the broader society. The Director, who I play, is pretty much an archetype of power and authority and patriarchy, and then you have to peel that back and try to create something real inside that.” 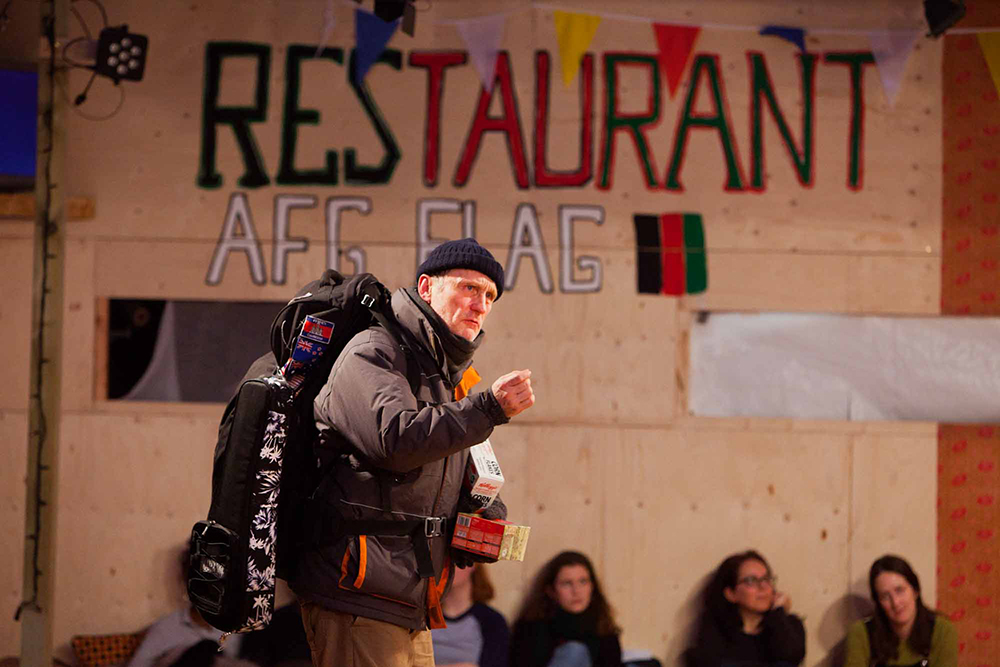 "When it came to issues around masculinity, I found myself, to some extent, defending the character"

In relation to that, did you ever feel the need to protest the representation of the male characters?

“I didn’t really feel a need to protest. Not least because I really like Ella’s [Hickson, the playwright] writing. And my test always is the sayability of a line. You know, I’ve been in plays where the lines are just difficult to say, because they don’t hang together as things human beings might say. But, Ella’s writing does. There’s a joy in that and there’s an ease with that. Blanche’s [McIntyre, the director] direction was very respectful too, adult, in lots of ways.

“When it came to issues around masculinity, I found myself, to some extent, defending the character. As an actor, I always look for the vulnerability in a character, and that’s not always the best thing to look for but I feel like I need to know what that is. And then I might mask it. Another version of playing that part could be quite monstrous and all pervasive and powerful, strong, pushy, all those things. But first, that wasn’t necessarily in the writing and second, it certainly wasn’t Ella’s [Hickson] intention.

“I see what is in the play in my own life as an actor. The power structures are there for writers and actors. And I find acting can be emotionally challenging in a similar way. Sometimes you generate emotions, as an actor, which are painful. Or thrilling. Or make you full of love for everyone. You Ignite little parts of yourself. Sometimes you get too involved. I learnt, over many years that I have to protect myself…

“I think I never felt the need to protest because I sort of just agreed [laughs]. I’m not a power figure. In all honesty, more often than not, actors in a rehearsal room are not the power figure.” 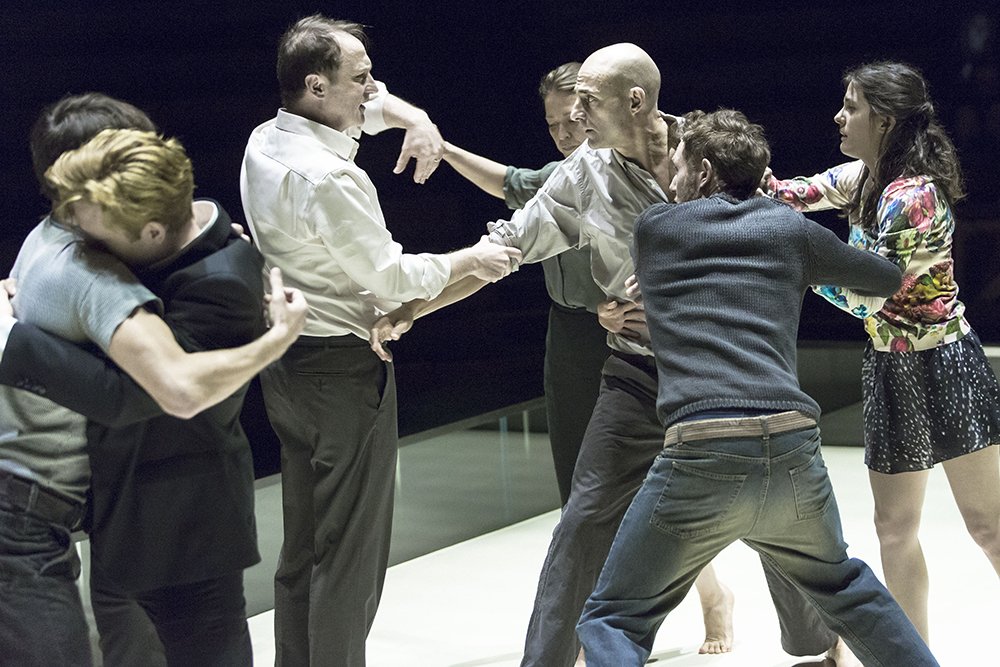 "What would it be without that? If there was no writing? It would be barbaric." Michael Gould in "A View from the Bridge", Young Vic. Photo: Jan Versweyveld

"Just hanging out with Darth Vader on set, that’s enough"

You’ve done some films too…

“When you do a film you’re further away from the creative process. I love the focus that it brings to an actor. You know? ‘How would I pick up that phone?’ Or, ‘how would that character smoke that cigarette in that singular moment?’ It’s very precise and nuanced. And the fact that you can have another go, do it again. But then we cannot go past this conversation without mentioning Star Wars. Just hanging out with Darth Vader on set, that’s enough. That’s job done [laughs].

“I did this TV thing which was quite immersive, it was called The Trial: A Murder in the Family, which was a drama-documentary in effect. I was playing the accused. We had to do a whole lot of backstory in preparation, and then we had to put that narrative on trial with a real jury and a real barrister and a real judge. On the final day, when we were being taken into the court, I was in such a state. I was looking at all the brick around me thinking, ‘god I’m gonna be incarcerated!’ I’d forgotten that it was… Pretend.

“The funny bit of the whole story was that it was two weeks, Monday to Friday filming The Trial, then on Saturday, I shot Star Wars [laughs], right in the middle of it! That was bizarre. That was glorious in a way. And then, my own barrister, I mean my character’s barrister, a real barrister, who I didn’t meet as myself until after the whole thing had finished, he went, ‘did you have a nice weekend?’ to my character. And I wanted to say, ‘actually yes! I had a great weekend!’ but I had to make something up, ‘yeah, you know, I had pizza with my kids.’”

Can a writer change the world?

“I think writers change the world all the time. Journalists, theatre writers, film writers. The situation is not going to change, fundamentally, by a bit of writing. It’s not so chronological. But what would it be without that? If there was no writing? It would be barbaric. People would not have any sort of theatre by which to judge themselves, through which to understand who they are. But writers don’t necessarily change the world for the best. Words are weapons sometimes. Particularly when they’re handled in political situations.

“In the play, she wants to turn the system. She wants to change the world. She can… And she will. But she might not even notice she has. I think that’s what’s so fascinating about writing… People burnt books in the past for very particular reasons; and still do. Because words are subversive, and winners write history.”

Michael Gould in The Trial: A Murder in the Family

"Why are we so scared of political education?"

What changes would you like to see in the world?

“The thing that troubles me right now is division. The binary thing that we keep looking for, like ‘leaver or remainer’. I know it sounds really wishy washy, but I think what theatre does, and arts do, and writing can do, is connection. Watching a play is a communal activity. Trying to work something out. That’s why I love it. If I had any sort of ambition it would be that we do that more. And what Paul [Hilton] said in your interview about arts education is great and fascinating.

“Well, I’ve started by doing pretty radical, left-wing plays in schools in the time of Margaret Thatcher. Messing with kids’ heads. That’s my happy place as a theatre practitioner… With that, I often think, why are we so scared of political education? There’s a lack of understanding of what we’re doing politically. You know the fact that the day after the EU referendum, the most searched item in the UK was, ‘what is the EU?’ and that’s a lack of political education.

The Writer is on until 26 May at Almeida Theatre.