Playing Jesus was the most miserable experience: Interview with Pearce Quigley

Pearce Quigley talks "Hamlet" and "As You Like It", acting while doing sign language, yearning for playfulness and "accentism" in theatre 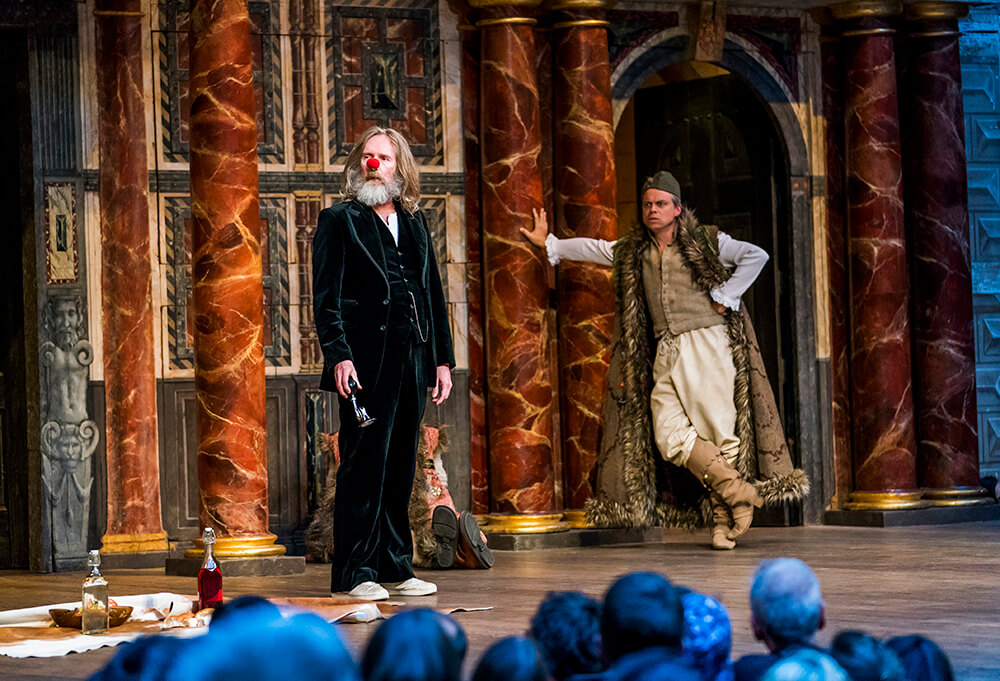 Coming to Shakespeare’s Globe was a relief. No one is stopping me being me. Pearce Quigley as Jaques in "As You Like It", Shakespeare's Globe. Photo: Tristram Kenton

I met up with Pearce Quigley a week before our interview, he mainly spoke of his respect and admiration for deaf co-star Nadia Nadarajah. As we were catching up, I mentioned my main cause of stress nowadays – a not-for-profit theatre company I’m setting up, and its plan to introduce more working class heroes into the theatre industry and vice versa. He was so loving and supportive – I was instantly reminded of our beautiful conversations 3 years ago when we first met while he was in National Theatre’s wonderful The Beaux’ Stratagem.

With his talent and kind words, it is no surprise Shakespeare’s Globe keep wanting him back, having played on its stage in Doctor Faustus (2011) and A Midsummer’s Night Dream (2013), amongst many others. He’s also graced many other stages such as Royal Court, Royal Shakespeare Company and Walter Kerr in Broadway. His many screen credits include the TV series Queer as Folk (2000) and the Detectorists (2014), and films Breaking the Bank (2014) and the upcoming Peterloo (2018). Pearce can currently be seen performing in the Globe’s “ensemble” cast in the interchanging Hamlet as Rosencrantz and in As You Like It as Jaques.

“I’ve read that! I don’t know where that came from. There was a workshop, which didn’t seem that different to me from a conventional way of working, except, it was aiming to be more collaborative.

“Then they came to me and said ‘we’d like you involved. It’ll be Jaques [in As You Like It] and another part which we haven’t decided yet.’ They said ‘everyone will have a nice part in one and then a smaller part in the other.’ Then in rehearsals, I remember we were all given welcome packages. In that it said I was playing Rosencrantz [in Hamlet]. So I was going around the room to all the actors going, ‘have you found out who you’re playing?!’ [laughs].

“I've also read that we didn’t have a director… We had two directors! Federay Holmes and Elle While. Elle worked on a lot of the scenes with Nadia [Nadarajah], who’s a deaf actress. We were all in the room all the time. People were doing other people’s lines, a lot of theatre games were played. So it was very ensemble in that sense. The only time people went off was when Elle was working with Jack [Laskey] and Nadia to work on Rosalind and Celia [their characters in As You Like It].” 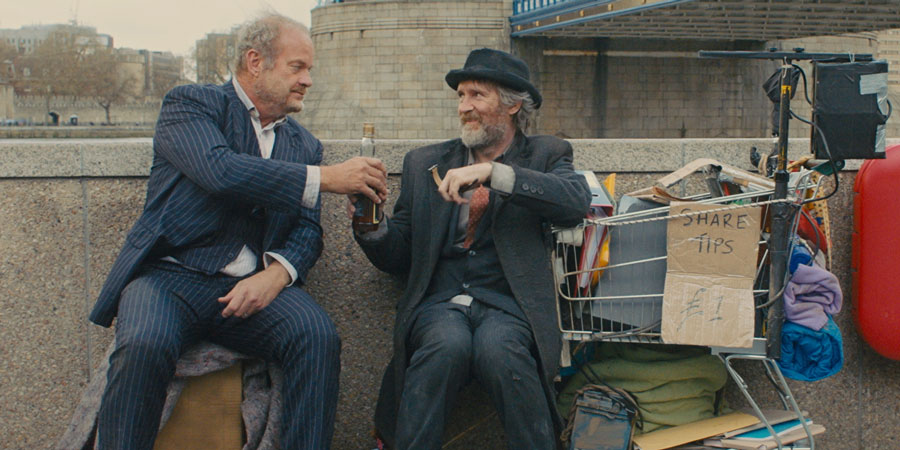 "When Rosencrantz sees people doing shit sign language, which we worked into the show, he doesn’t find it funny. He’s very protective of Guildenstern." Pearce Quigley in the film "Breaking the Bank" (2014)

“It was challenging. I’ve never done anything like it before… I don’t think I'm very good as Rosencrantz [to Nadia’s Guildenstern]. It takes me ages to get my head around things and acting and doing sign language at the same time is a bit like tapping your head with one hand and rubbing your tummy with the other. I’ve never felt free with it, until quite recently, and now I feel I can, kind of, be a bit more playful, but not as playful as I am in As You Like It.

“I’m just so full of admiration for Nadia. To not be able to hear what is happening. It confounds me that she can be so expressive and in the moment. There’s no reason why she wouldn’t be but to me …

“I suffer with a little hearing loss in one ear, and I know how debilitating it is for me sometimes, and at work occasionally I have to ask people to repeat things… I just think she’s an incredible actress and person.”

Having seen you on stage before, changing scenes last minute, you seem more playful to me than most…

“I try to be. I find it much harder in Hamlet. In a way that, for instance, Jack [Laskey] clearly doesn’t in As You Like It [playing Rosalind to Nadia’s Celia]. He’s different every single night. He’s doing the sign language. He’s speaking to her. I suppose there’s something about the characters as well, and the formality of what we’re doing in Hamlet. It doesn’t lend itself to be too playful.

“I don’t want the sign language to be this funny thing, there’s a bit of that, more than enough. When Rosencrantz sees people doing shit sign language, which we worked into the show, he tolerates it, but he doesn’t find it funny. He’s very protective of Guildenstern. I would like to explore that symbiosis… It’ll come. We’ve til the end of August [laughs] there’s lots of time.” 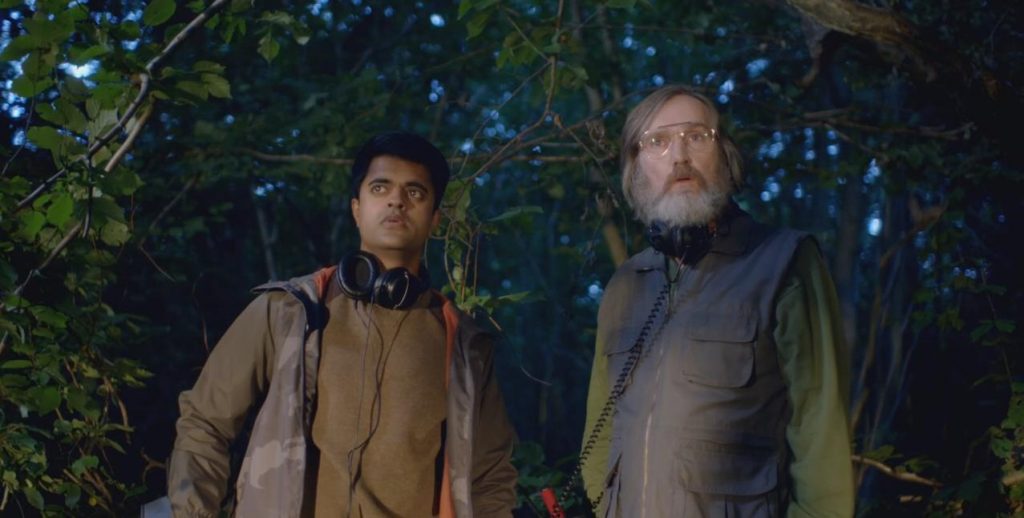 "These photos were fucking amazing! I looked like something out of Brideshead Revisited." Pearce Quigley in the TV show "The Detectorists" (2014)

"I’m not very good at being serious"

Have you special love for the Globe? You keep going back!

“This is number 5… Actually this is number 5 and 6! A mate of mine [Matthew Dunster] directed Doctor Faustus here and asked if I wanted to be in it. It was a small part, it seemed funny and I love Matthew. The great Paul Hilton was the lead in that, so there were lots of good people in it. Arthur Darvill was in it so I knew my daughter would be delighted to come see it, cause she was such a big Dr Who fan. So it ticked all the boxes. It was great.

“When I came here it was like a revelation, this place is amazing. It's a unique experience… Especially for a comic actor. There’s something about the building; I love it! Nobody’s further away than anyone else, nobody’s right at the back miles away. I was lucky enough to get asked back again and kind of playing a variation of the same character really, but I’ve come to find that’s what I do best. So I’ve been lucky to get to do it, basically the same performance [laughs] in 6 shows. I’m not very good at being serious.

“The most miserable experience I’ve ever had on stage was playing Jesus at National Theatre [in the play Paul]. Because I didn’t have a single joke. Most would be like ‘great! Jesus is fantastic!’, I was just like ‘this is so dull!’ I mean, the play was great. The production was great. I was just like [laughs]… Terrible!”

You mentioned ‘accentism’ to me in the past, how do you experience it?

“People, inevitably, make judgments about somebody based on their appearance, their gender, their accent. My name is Pearce, which is quite a posh name, not the way I spell it but it’s considered posh. I used to have headshots that the wonderful actor Bob Peck sorted out for me, God rest his soul. And these photos were fucking amazing! I looked like something out of Brideshead Revisited.

“So the next 3 or 4 interviews I went for were like… Posh roles… And I start speaking. And they’d be like, ‘oh dear’. That was another reason why coming to Shakespeare’s Globe was a relief. No one is stopping me being me. I’m allowed to be Northern. It still annoys me when reviews mention it, like it’s important. The critics would probably say they’re just being descriptive, which is fair enough. I don’t think it’s used as a judgment, I hope it isn’t. There’s diversity, and when it gets to accents it’s like, ‘no I’m not prepared to go that one step further’.

“I’m not advocating that should be norm… You want to make it easy for audiences don’t you? If a father and son are supposed to be posh and the father’s accent is posh and the son’s accent clearly isn’t, you’re either being wilfully obtuse, or you’re introducing another element to the play, or if you’re doing it because you’ve got the best actors for the roles, then you’ve shot yourself in the foot, cause audiences, it seems, aren’t prepared to make that leap." 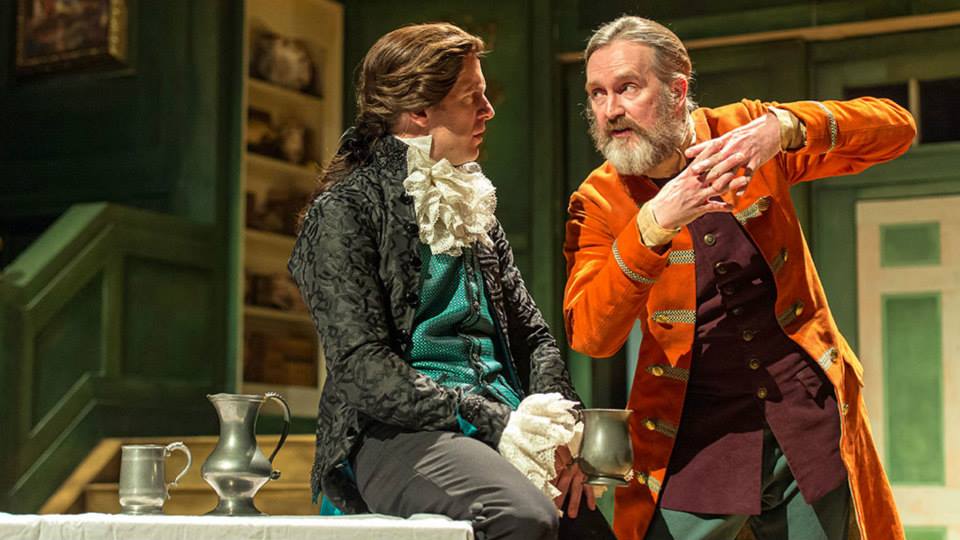 "People, inevitably, make judgments about somebody based on their appearance, their gender, their accent." Pearce Quigley in "The Beaux' Stratagem", National Theatre. Photo: Manuel Harlan

Following Lloyd Hutchinson’s stories about Israel, can you share more?

“I don’t remember much about Israel except how friendly everybody was… I remember the food was shit in the hotel… Oh we were only in Israel for a week [with the play Shopping and Fucking], so I packed a tiny little backpack. And the airport security gave me the hardest fucking time. Would not let me get out, going ‘why have you come here with only that many clothes?’ honest to God! He was convinced that I was up to no good.

“All the memories are coming flooding back now! [laughs] Me and Lloyd were looking for a McDonald’s. And going to a restaurant and getting very confused by the menus because we didn’t realise you had to read them backwards [Hebrew is right to left]. Families walking down the street with a machine gun, I couldn’t believe what I was seeing.

“Lloyd mentioned [in his interview] about us getting hassled in Jerusalem by a couple of little lads throwing stones at us… It was Lloyd that was terrified of the little kids. He was absolutely petrified, shaking he was, in case one of these boys threw a tiny stone at him. Or criticised his acting. Actually, that’s what really frightened him, the possibility that one of these kids was a theatre critic who’d seen him be terrible in something.”

“No… I just wanna say congratulations on you setting up your theatre company! I think it’s wonderful. I do. I think, most people, if they have the means at their disposal… What you’re intending to do with it, I think, it doesn’t happen that. Business people don’t tend to put their own money into their own ventures!

“I know it’ll pay dividends. I know it will. Because you’ll get people taking a genuine interest in this because of you doing that. It’ll open up more opportunities for what you’re trying to do for people from working class backgrounds. More power to your elbow young lady!”

Hamlet and As You Like It are on until 26 August at Shakespeare's Globe.