Lloyd Hutchinson talks "Absolute Hell", onstage games, politics and how to make it as an actor 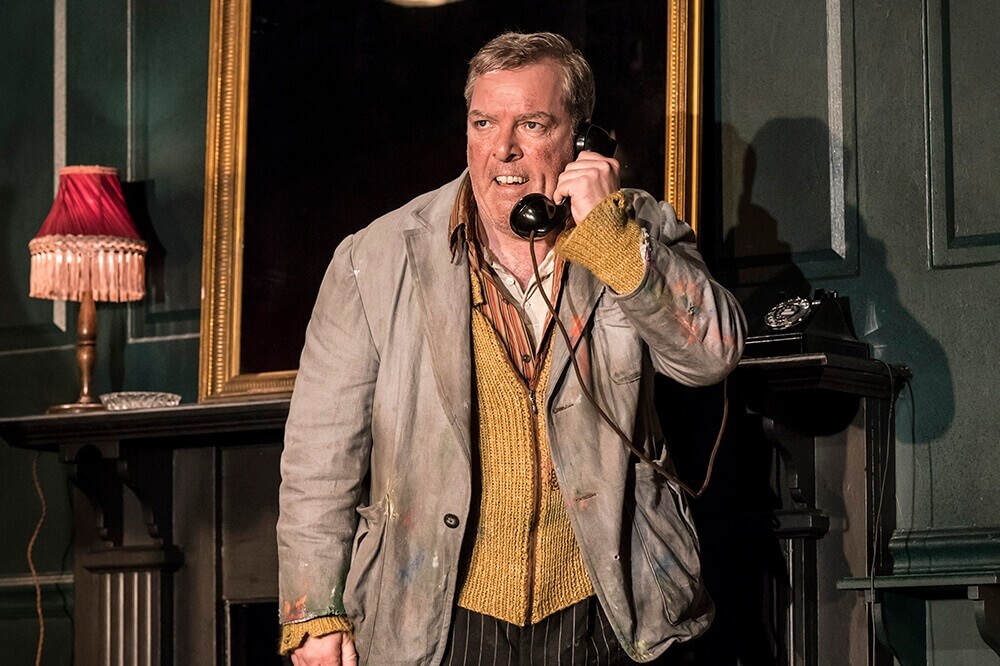 When I read it I just thought ‘this is extraordinary. These people are extraordinary.’ Lloyd Hutchinson in "Absolute Hell", National Theatre. Photo: Johan Persson

In my 3.5 years in London I’ve seen the talented and busy Lloyd Hutchinson on stage in 7 different plays. When I mentioned that to him, he asked me for my favourite one. I was not prepared to pick between such versatile productions, be it the deeply tragic Husbands and Sons (National Theatre), laugh-out-loud The Beaux' Stratagem (National Theatre), or brilliant original adaptations such as The Seagull (Lyric Hammersmith) and Midsummer Night’s Dream (Young Vic). Despite spending this much time on stage, Lloyd also has an extensive list of screen credits including the film Florence Foster Jenkins (2016) and the TV series White Gold (BBC Two). Next he’s set to take the West End, Duke of York’s stage in the critically-acclaimed Chichester Festival Theatre production transfer of King Lear, opening in July 2018

Lloyd is currently in Absolute Hell on National Theatre's Lyttelton stage. The play tells the story of the nightlife folk in the bar La Vie En Rose in post-World War II Britain. If writing one truly fully-formed and dynamic character is a difficult task, Rodney Ackland [playwright] succeed greatly by featuring over 20 of them; each with their own problems and unique voices. From bar hostess Christine [played by Kate Fleetwood] who’s desperate for adoration and company, to writer Hugh [played by Charles Edwards], who’s dealing with a failed career and a hidden, and at the time illegal, homosexuality. All while the place is falling apart around them.

“You can only do a play with 28 characters at the National Theatre these days! A pretty adventurous fringe company would be up for doubling it all up there. Having a play with 28 characters is great fun. Cause the cast is big there’s always going to be personalities there that you enjoy, some people you know from before, some people you’re meeting for the very first time…

“If you’re out in the provinces doing a play there’s all those money constraints now, casts tend to be small, like 6… 8 tops maybe. But that’s it. National Theatre just allows you so much more. So 28 actors… It makes for a lot of fun backstage [laughs]… And sometimes on stage…”

“There’s always shenanigans when I’m involved!… Apart from the usual game of pass the cork… See if the cork can get around all 28 members of the cast by the time the play finishes. That’s a good game. I didn’t start it by the way, I have to make that perfectly clear!

“When I was lying there as Michael Crowley, pissed on the floor, suddenly Jonathan Coote [actor] comes up and passes a cork into my hand… Of course I gave it to Kate [Fleetwood, actor], cause she was the only actor I came into close contact with. Kate freaked and just left it sitting on the stage! And I thought, ‘that’s a health and safety hazard for a start. Somebody’s gonna go over it. How dare she be so careless as to leave the cork [laughs].’” 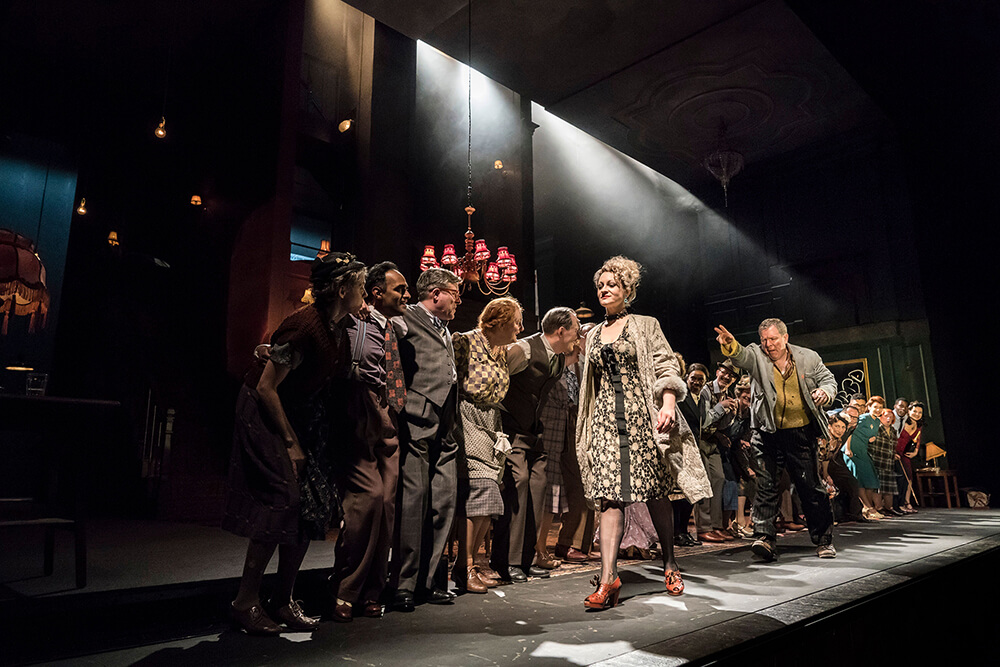 "The writer knew that world completely. He knew it, he lived it, he loved it. And he survived it." Lloyd Hutchinson in "Absolute Hell", National Theatre. Photo: Johan Persson

"I first met Tony Blair in 1994 and I remember thinking, ‘why is everyone fussing around this bloke?’"

Have you seen Absolute Hell before? What were your thoughts about it back then and now?

“I did my first job at the National Theatre in January 1995. While we were performing that play, the production of Absolute Hell with Judi Dench was rehearsing next door. I didn’t see the show. I remember Richard McCabe [actor] telling me he was playing this guy called Michael Crowley and it’s going to be really good fun. So that was in my head when Joe [Hill-Gibbins, director] offered me the part last year. I have seen it on the telly, and it’s a truncated version, but still it’s all there.

It feels quite political. With a Labour poster, that feeling of a house of cards, big issues ignored by characters who each have their own, many, problems…

“It’s nice to be able to swing the red flag on stage. That’s never happened before. I suppose you can absolutely draw from it what you want. Society crumbling away and falling apart post-war, while a new dawn beckons of Labour and welfare and that new optimism. That’s all absolutely there.

“I suppose that could have been back in 1995 [previous National Theatre production of Absolute Hell] as well. We were coming to the end of 16 or 17 years of Tory rule and there was a feeling that things were gonna change. That Labour were no longer that spent force. And then these names started to emerge, Tony Blair and Gordon Brown. We’ve never heard them before.

“I first met Tony Blair in 1994 doing Tom Stoppard’s play, Travesties, and I remember thinking, ‘why is everyone fussing around this bloke?’, and that was because he was being fast-tracked to lead the country. And there was the kind of weird sniff of optimism in the air. Of course it all goes away in the end [laughs].” 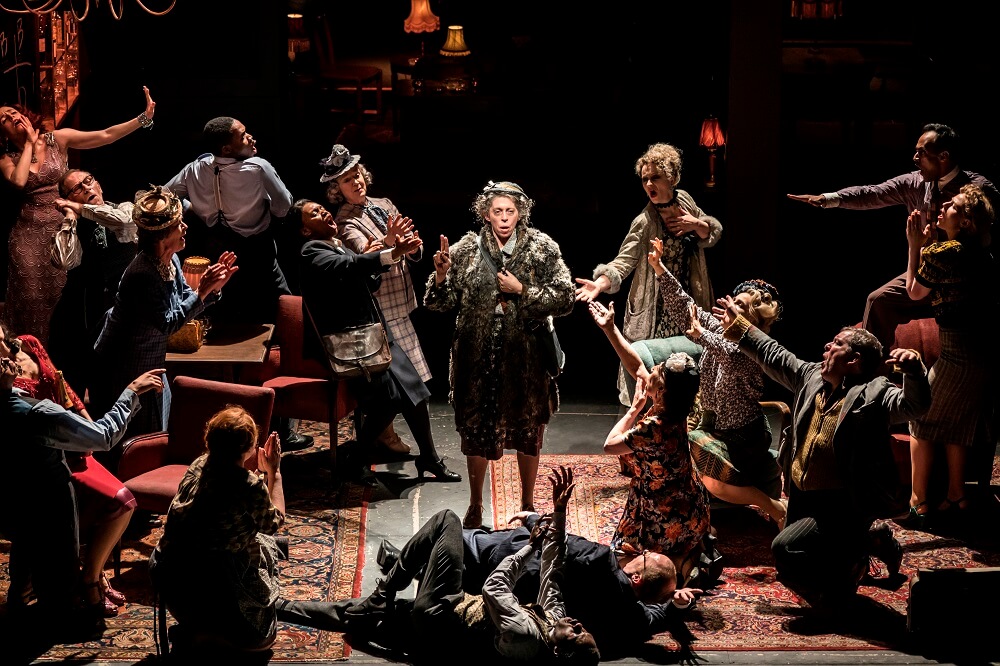 "‘If you’re trained to be an actor – participate, it’s your job’"

I’ve seen you in more plays than any actor since moving to London. What’s your secret?

“I get around a wee bit! Gosh. I think I’m easily bored. I’m not one of these guys who holds out to do some telly. I’m always reminded of that David Mamet story, talking about the actor who turned down a great part in one of his plays because he wanted to hang out for some cool television in LA, and he didn’t get any cool television in LA. And Mamet was always saying, ‘if you’re trained to be an actor, participate, it’s your job.’ I’m always saying that to other actors. Even actors in my own kinda peer-group. You spend 6 months out of work, what for? So that’s just me. I like to participate, and get in there. If somebody comes along and offers you a nice gig, then why not? So that’s my secret [laughs]. I turn very little down!

“I get some lovely jobs, with some lovely people. Great directors, like Marianne Elliott. Joe Hill-Gibbins. You’d be nuts to turn those kind of jobs down. Joe directs a lot of opera, and I’m not an opera singer, so to get the chance to work with Joe… He doesn’t do plays left right and centre. And Marianne of course is a force [laughs]… in America, all over the world. I get in there, and enjoy the experience.” 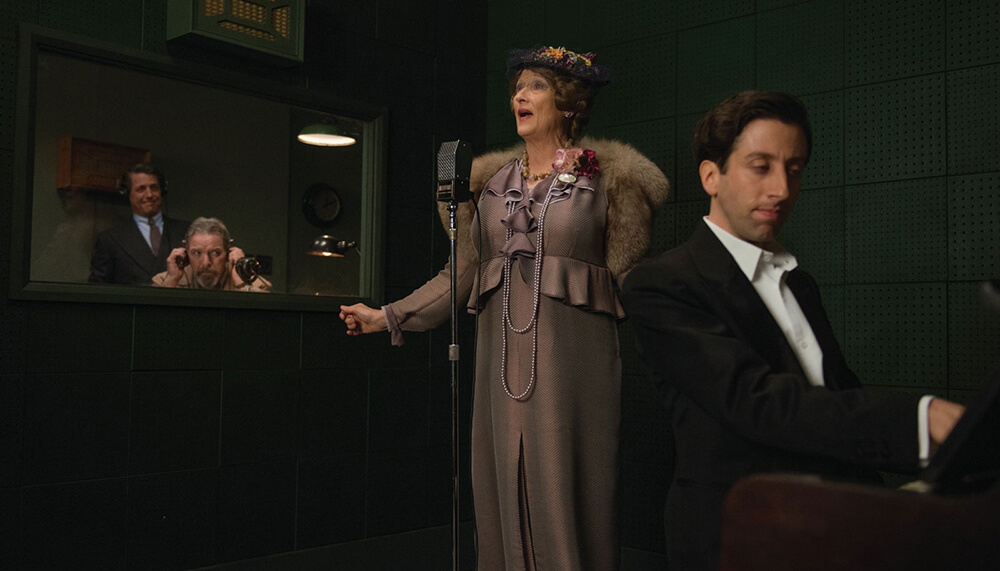 "There’s so much talked about Israel you gotta actually be there, meet people." Lloyd Hutchinson in the film "Florence Foster Jenkins" (2016)

You toured with a play to Israel too…

“I worked in Tel Aviv twice. We went there with Shopping and Fucking back in 1996, I think. And then I toured there with Troilus and Cressida with the Royal Shakespeare Company in 1999… I went for a tour around Jerusalem with Pearce [Quigley, actor]. We just walked around on our own. These two little lads, they must have been around 7 or 8 years old, ran up to us and asked where we’re from. We told them we’re from United Kingdom so they said, ‘we’ll show you around, you’ll give us money.’ So they showed us around and Pearce gave them some money at the end. Of course, it wasn’t enough money.

“So then these kids started chasing us [laughs] and chucking stones at us. Here I am being stoned in Jerusalem! I managed to run and make a detour, and I made my way up on to the city walls, where you can have a good look… and I was able to see Pearce walking around really terrified of these two little kids! It was hilarious. It wasn’t in any way dangerous. Just really fun to see Pearce looking so terrified out there. But in Tel Aviv we had a smashing time. There’s so much talked about Israel you gotta actually be there, meet people.

“Most of the Jewish actors and theatre people I know are quite secular, liberal, it seems to be norm. I enjoyed that. It was nice to actually talk with likeminded people. I remember them talking about Gaza and Palestine, and the two state notion was absolutely to the fore amongst them. And I would say, ‘what’s the sticking issue?’ and they said it’s just nature of home. ‘It’s not our fault, this is home, we live here.’ That notion of home is really strong. And for Palestinians it’s home as well. And there’s that wall between those two notions of home…

“When Radiohead got shit for playing Tel Aviv I kept saying to people, ‘gosh I played Tel Aviv twice and nobody gave me any hassle! [laughs]’”

“I’m involved in the Actors Children’s Trust with Paul Higgins and Peter Forbes [actors]. It’s a charity that was set up by Laurence Olivier and John Gielgud amongst others, way back, to provide help for children of actors who may need help with things like child support or things like that. It’s really good… And not enough actors know about it! Not enough people know about it. So it’s called ACT, and if you’ve got kids and you’re finding it hard to make ends meet, they can help.”

Absolute Hell is on until 16 June at National Theatre.