Doing "The Inheritance" is therapeutic for me: Interview with Hubert Burton

Hubert Burton talks about acting in "The Inheritance", its personal significance, his path into performance and going viral on YouTube 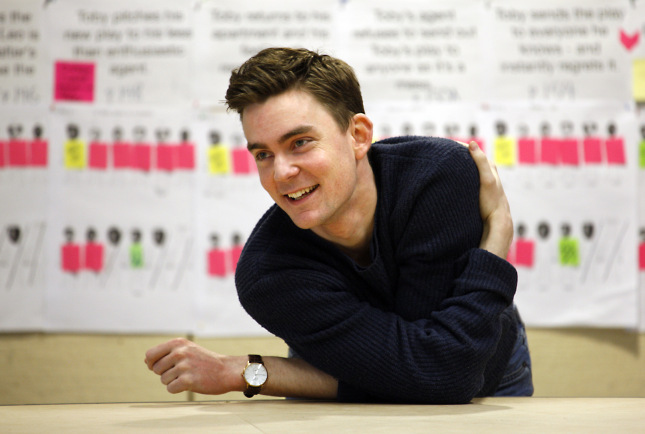 I used to hide from the sports teacher 'cause I just didn’t wanna do it; I just used to spend all my time in the theatre. Hubert Burton in rehearsals for "The Inheritance", Young Vic. Photo: Simon Annand

Matthew Lopez’ play, The Inheritance, does something extraordinary; it manages to balance its narrative perfectly between the past and the present, the personal and the universal. This is partly achieved by turning novelist E. M. Forster, whose homosexuality was only revealed posthumously (with the release of his unpublished novel, Maurice), into a character; a sort of “mentor” for a group of young, modern gay men. Moreover, certain parts and themes from Forster’s novel, Howard’s End, are played with and used to show individual pain and global grief during the AIDS crisis in the 1980's.

Hubert Burton graduated from RADA in 2014 and immediately went on to film the BBC war drama The Passing Bells in Poland. He’s also starred in Jekyll & Hyde (ITV), spent a year performing on stage at National Theatre in both Waste (2015) and Deep Blue Sea (2016), and in the feature film Their Finest (2016). He’s half of the duo Tom & Hubert, whose witty YouTube videos have been going viral online.

Hubert and the other actors in this group of young men each take on several roles, and together represent Forster’s students and truly, an entire gay community of our times.

Have you read E. M. Forster’s work before?

“I’ve read Howard’s End before, and we watched the film as part of the rehearsal process, with Vanessa [Redgrave, who cameos in The Inheritance] in it of course… I think it’s a sort of genius, Matthew’s [Lopez] way of doing it, because what’s so heart-breaking about Forster is that he was so closeted, it was a very difficult time to be gay. He is with us from part one and he’s watching a lot of contemporary gay men being incredibly open and he couldn’t have been. To have him there with us, I think, is a dramatic device of genius. Turning Howard’s End into a very contemporary gay story is very powerful.

“I haven’t read Maurice but I’ve seen the film. I watched it secretly. I read something about Hugh Grant playing a gay character and I loved Hugh Grant… I found it really powerful, but it’s also quite a sexy film, in a way. Being quite a young, repressed, British schoolboy, it was really exciting to watch something that was incredibly gay and exploring those themes and it brought up all those feelings at the time that I wasn’t able to express. I was probably about 17 and was kind of, confused, and desperately trying to come to terms with my sexuality. Maurice was definitely one of those moments. So then to do this, and hear Matthew Lopez talk about how important it was for him as a young gay man, it was quite a moving moment for me; something I mentioned to him as well when we started rehearsals.” 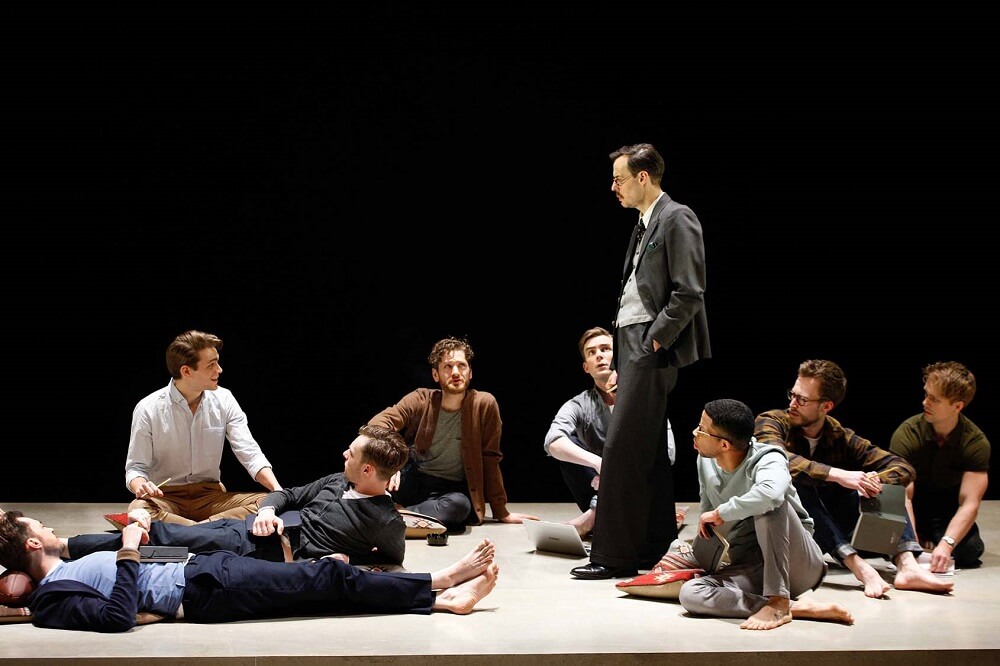 "Forster is watching a lot of contemporary gay men being incredibly open and he couldn’t have been." Hubert Burton in "The Inheritance", Young Vic. Photo: Simon Annand

"It's when you get people in who might find parts in this play quite difficult…. That's when it's at its most important"

Did you feel a need to be more vocal about your sexuality once you started doing the play?

“It’s definitely let me be more comfortable and open about my sexuality in a way that I haven’t been before… And that’s nothing to do with previous places of work. Our industry is incredibly open, and I’d like to think, tolerant of everyone. But, because of the nature of this play, very early on I felt much more comfortable than I have done before and it’s one of the most important things I’ve taken away from it actually, other than working with lots of incredible actors. I never wanted to be defined entirely by my sexuality, and the worry I’ve always had is that it could happen. It’s a naïve way of looking at sexuality, it might partly have to do with upbringing or whatever, I’ve found it very difficult to be open early on about the way I am.

“It’s therapeutic, doing this play, for me. I mean, having my family come and see this play. That’s when doing this feels most exciting. It’s not when you’ve got your friends in who share your views and beliefs. It’s when you get people in who, you know, potentially might find parts in this play quite difficult. So when you get those people into this theatre, and then you see them afterwards and they say, ‘I’ve learnt something,’ that’s when it’s at its most important.”

How well were you familiar with the history of the AIDS crisis before the play?

“You read about it… I never learnt about it in school really. I knew that it happened and I knew that people were absolutely terrified. I wasn’t aware that administration deliberately turned a blind eye to it; that shocked me. They could have done so much more, so much earlier, and that’s unforgivable. I think what this play hammers home in a really powerful way is that an entire generation of gay men was lost. I mean, when Henry says ‘there are no gay men my age’ it feels like an exaggeration, yet, as a line, it’s incredibly potent, and you hear people in the audience reacting to that line in a way that is actually sort of terrifying. I think for a very specific generation of gay men coming to see this play… They lost so many friends. I wasn’t quite aware of the magnitude of it, and the way that Reagan was just unable to engage with it for so long… And that if he had, perhaps, lives could have been saved.”

The company of "The Inheritance", Young Vic. Photo: Simon Annand

How did you get into acting?

“I did acting at school. It was an all-boys school so it was a bit difficult. Not to say I didn’t have good times there, but it was a bit of a tricky experience especially when you’re going through puberty and feeling confused. Theatre was sort of the only thing I could do that I felt like I was having fun. I felt I was expressing myself, ironically, through other people. So I did a lot of acting to the point that I was actually told to stop, it was affecting my academic work. And for a school which is incredibly sporty, I did no sports. I used to hide from the sports teacher ’cause I just didn’t wanna do it and I just used to spend all my time in the theatre.

“Afterwards, I went and worked for a guy who taught me at school; he set up his own theatre company. I worked as an ASM [Assistant Stage Manager], I was lagging sets around, and I also took on small parts in the shows that he toured around the country. I was working alongside professional actors, professional stage managers and technicians. I was coming to contact with the kind of people I’ve never met before, and we all shared a common love and interest in theatre.

“A very inspirational English teacher of mine told me to look into applying to drama school, and I started auditioning. I spent a year auditioning for the main London drama schools. I got into somewhere minor… I won’t say where that is. I’ve decided not to take that. I wanted another shot at the London ones. I auditioned the second year for the big London ones again, and I got into RADA and Guildhall. I decided to go to RADA. While I was still working for this guy. I was surrounding myself with theatre, learning the hard way because I wasn’t being paid much. Being overworked really, but having the best time ever. I don’t know if I’d have got into drama school if I hadn’t spent two years touring with that company, and I loved it.” 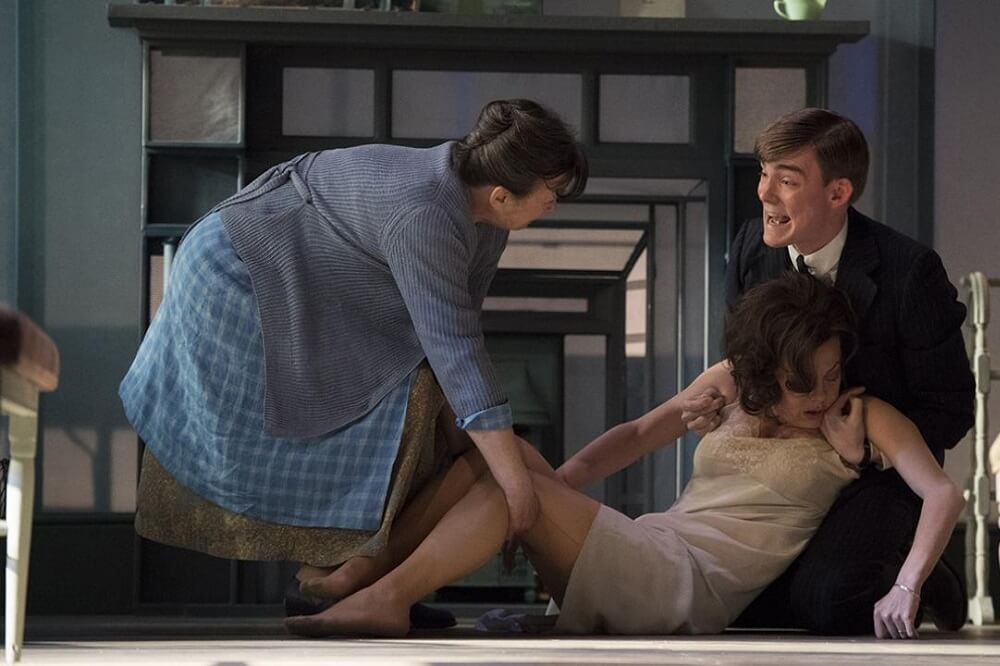 What about Tom & Hubert?

“We’ve been doing it for so long. It’s quite a release doing those videos because we don’t take it very seriously; we just have fun doing it. The way we got into it, we put up a camera and filmed us two. That got a lot of views in itself. But what we figured is that people really like the more filmic side of our work and that, inevitably, meant more money had to be spent hiring filmmakers… But at a lot of auditions I’ve been to people have said ‘I’ve seen your videos’. Actually, the only times I ever get recognised, and that’s not very much by the way, is from people who’ve seen our videos. Interestingly, Tom never gets recognised and he always gets really annoyed. In fact, someone’s come up to us once and said hello to me and ‘I love the videos’ and Tom has been standing right there. I’ve had to be like ‘oh this is Tom, he’s also in it with me’. It’s weird. He’s got such a distinctive look.”

Well you’ve got a good face.

The Inheritance is on until 19 May at Young Vic Theatre.