A lot of rehearsals I was battling with my demons: Interview with Bettrys Jones

Bettrys Jones talks "As You Like It" and "Hamlet", playing two of Shakespeare's "manliest" men and Welsh stereotypes on stage 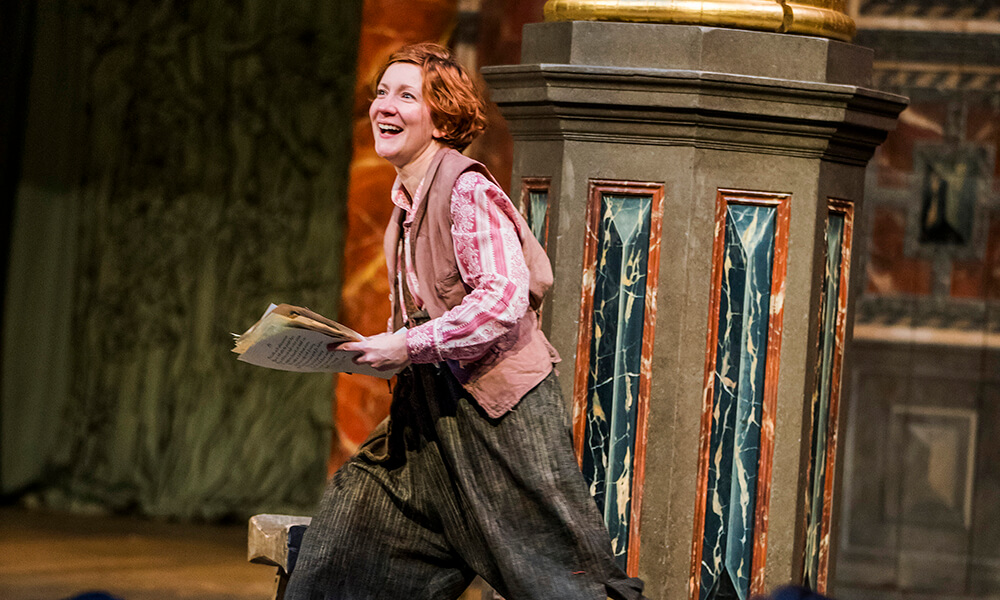 You get used to the boxes people put you in, so when people don’t put you in that box you kind of go, ‘but why have they done this?!'. Bettrys Jones as Orlando in "As You Like It", Shakespeare's Globe. Photo: Tristram Kenton

Bettrys Jones' many stage credits include The Tin Drum by Kneehigh, the wonderful Life of Galileo by Young Vic Theatre, The Little Match Girl by Shakespeare's Globe, and We Want You to Watch, Edward II and War Horse by National Theatre. On screen she appeared in TV series Skins (2009) and the film Private Peaceful (2012).

Beautiful, ginger and petit, when I sat down with Bettrys she admitted she often gets cast for the "younger" roles, and while surely it keeps you young at heart, she's happy when she gets to play "older" characters. Indeed, when she first appeared on stage as Laertes in the current Shakespeare's Globe version of Hamlet, much like when Shubham Saraf first appeared beside her as Laertes' sister, Ophelia, you could hear a giggle or two coming from the audience. However, Bettrys and Shubham quickly make the roles their own. Bettrys proves that Laertes doesn't need to look as you'd expect him to look, and certainly doesn't have to be played by a man; and she possesses this same talent when performing as Orlando, to Jack Laskey's Rosalind, in the Globe's current production of As You Like It as well.

You’re playing two men! How did you feel about it when you found out? Did you expect it in any way?

“I didn’t expect it. I just went into the meeting, We discussed the idea of the ensemble, the ethos, my experiences of being in an ensemble, and kinda discussed the two plays. They asked what I would play in As You Like It if I could choose, and I said Touchstone. Then we had a chat whether Touchstone is funny or not.

“I assumed it was an interview and then bring me back to read something. They said I wouldn’t be playing what I’d normally play, like I wouldn’t be playing Phoebe for example. And that night they offered me Orlando, which was a massive shock, and I was delighted for about five minutes, and then terrified! I suddenly went, ‘I can’t do this. Oh my God they’re gonna really hate me.’ I started composing my own bad notices and reviews… That kinda carried on until I started rehearsals.

“I didn’t know I was playing Laertes until three days before rehearsals started. [laughs] So there was another ‘oh my God!’ and because I’m so tiny, I really let that affect me. I don’t really know why, just, when you’re cast to type throughout your life, which every actor normally is, you get used to the boxes people put you in, so when people don’t put you in that box you kind of go, ‘but why have they done this?! They can’t do this! People are gonna hate this!’ when actually it’s nonsense.

“A lot of rehearsals I was battling with myself and my demons, and what I was capable of, and what other people are going to think of me. Until I relinquished that and just stopped caring. It was playing two men who are stereotypically quite manly, or full of testosterone, and I’m 4’10”. It’s a brilliant challenge. I just felt this gap between what I’d be and what I thought the characters should be, until the directors drummed into me that I was enough, and that it was about what I brought to the roles.

“I’m delighted I’m doing it! There are short men in the world and tall women in the world, and they are all beautiful. It is all human life and everyone deserves these stories.” 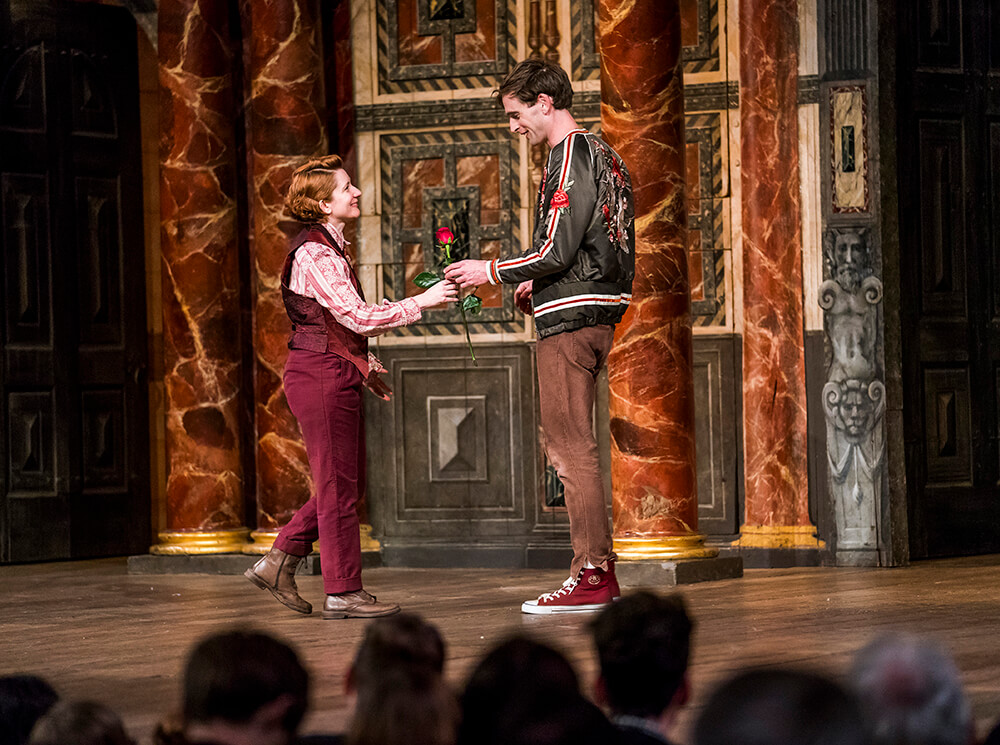 Bettrys Jones as Orlando and Jack Laskey as Rosalind in "As You Like It", Shakespeare's Globe. Photo: Tristram Kenton

Considering Hamlet is a tragedy and As You Like It is a comedy, did you find any similarities between the two while working on them?

“Swapping between Orlando and Laertes you realize these two characters are very similar in their hot-headedness. They’re also on the front foot, they just do things. They make decisions quickly. Laertes is considered a noble youth. Orlando is as well, he’s considered kind and gentle.

“The director said once, Orlando is who Laertes would be, if Laertes had Adam. Which is really sad, actually. Laertes is like the dark side of Orlando, and Orlando is like the light side of Laertes. They love quite desperately. It’s interesting to, kind of, flip between.

“It’s nice that me and Shubbs [Shubham Saraf plays Ophelia in Hamlet and Oliver in As You Like It] are playing siblings in both plays. So each play reinforces the other in terms of our relationship really, and our relationship on stage to each other. It becomes very sibling-like also in real life. 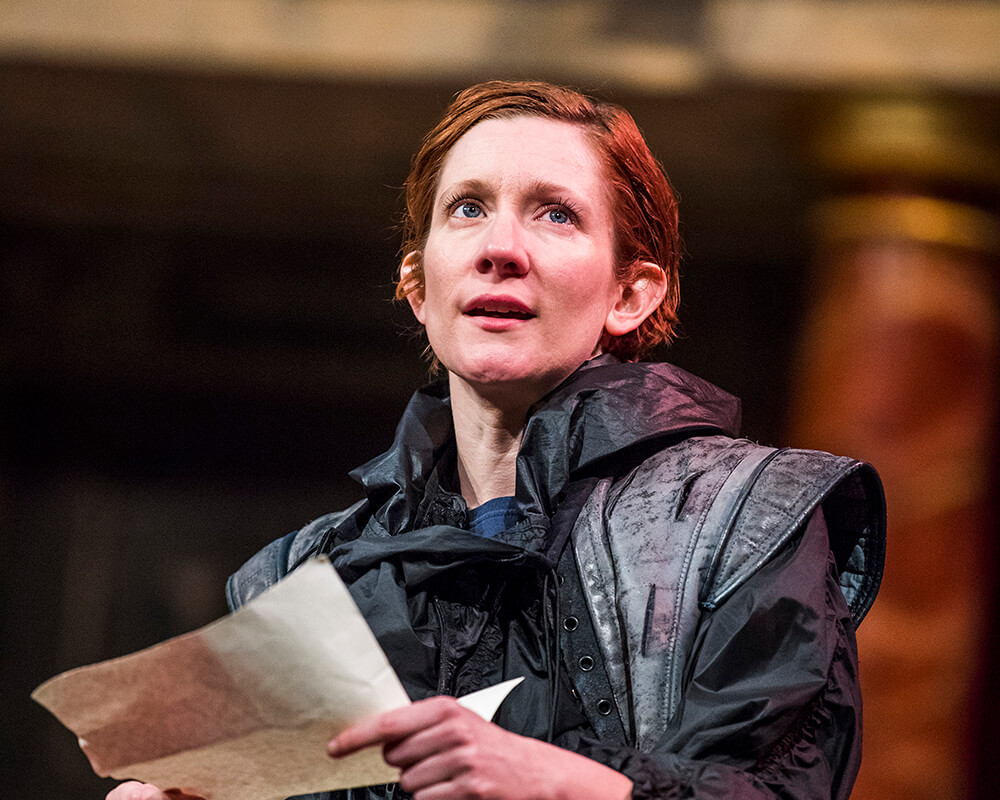 "I’m either not English enough or not Welsh enough." Bettrys Jones as Laertes in "Hamlet", Shakespeare's Globe. Photo: Tristram Kenton

Being from Wales, do you think it was more difficult for you to integrate into London theatre?

“I don’t have a strong Welsh accent, which might have been on purpose, I think. I went to Royal Holloway University in Surrey, my accent kind of morphed into the people’s I was friends with. So when I started acting, Welsh was a sideline part of what I’d be cast as. There’s not much call for Welsh actors or Welsh parts in England. But I can be Welsh and have worked in Wales before and since.

“The difficulties are I think I subconsciously always try to make myself sound more English. Which may be a mistake. But I’m either not English enough or not Welsh enough. Ultimately, not enough of one thing or another is a difficulty I’ve always found… And then I decided not to care [laughs].

“You’re stuck between two stools. Then you’d suddenly be putting on a character, like put on some kind of really Welsh accent and be really Welsh [strong Welsh accent] ‘here we are the rugby ra! Raaa!’, and I didn’t really want to be inauthentic. But then it makes me cross because people don’t think I am Welsh. And I go, ‘I am and I went to a Welsh school and I can speak fluent Welsh’ and they wouldn’t really believe me! It’s a kind of struggle you’re constantly navigating around. But…

"A friend of mine who’s stopped acting, he said whenever he worked in England, because of his accent, he’d only ever been cast as a Welsh clown. He’s never been cast as someone intelligent. It’s the assumption of stupidity. It’s really fucking annoying. Stereotypes… You needlessly fight against it or you totally relinquish and surrender yourself to it…”

I don’t think you surrender as long as you’re out loud about it and against it.

Hamlet and As You Like It are on until 26 August at Shakespeare's Globe.