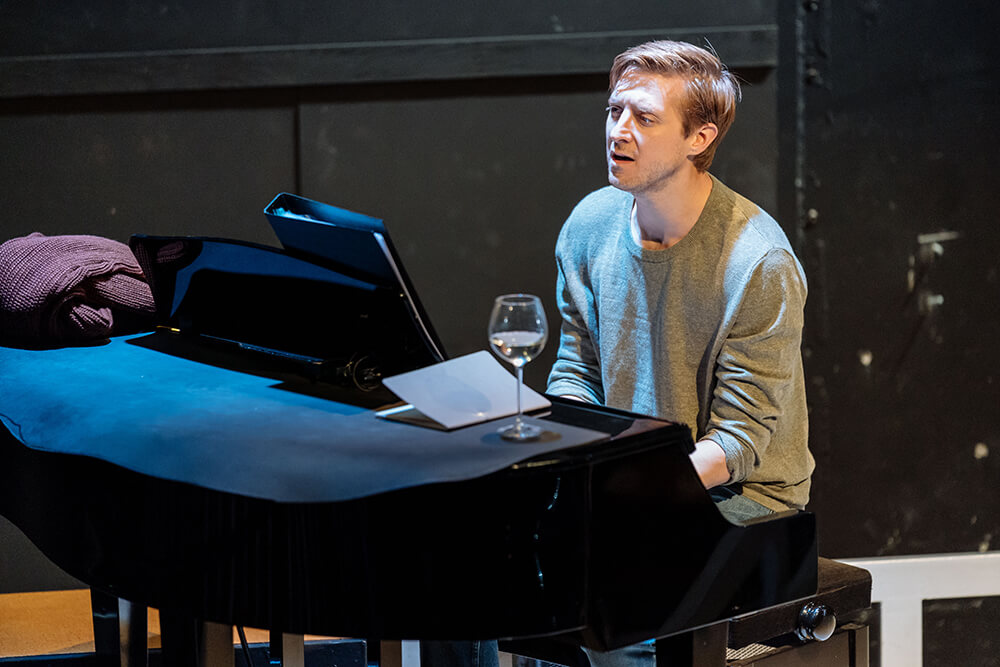 I was doing piano lessons, basically. I felt like I was 14 again refusing to practice. Arthur Darvill in "Genesis Inc." at Hampstead Theatre. Photo: Manuel Harlan

When you work in customer service you quickly learn that the easiest way to test a person's character is by the way they treat those who serve them. And so, I'm happy to say that one of my first interactions with Arthur Darvill was when I was waiting on him and his family some years ago, and as you can imagine he passed the test with flying colours.

His list of stage credits include Hir at Bush Theatre, Treasure Island at National Theatre, Once in the West End and Broadway, Doctor Faustus at Shakespeare's Globe and Swimming with Sharks at Vaudeville Theatre. He starred in the TV series Legends of Tomorrow (2016) by Warner Bros, ITV's Broadchurch (2013) and BBC's Dr Who (2010), amongst others, Arthur certainly keeps busy. But as well as being a talented actor, he's also a gifted musician; he composed scores for several plays, including Fantastic Mr Fox and I Want My Hat Back, he's working on an album and has a gig in September with his wife and partner, Inès De Clercq.

Arthur is currently in Genesis Inc. at Hampstead Theatre. The play tells of the commercialisation of the IVF industry. It centres around a couple who's spent thousands on treatments in order to successfully conceive. Their story intertwines with that of a businesswoman who wishes to have a baby with Miles, played by Darvill, a music teacher, and also her gay best friend. As he struggles with a down payment for a flat, she offers to help with his finances if he becomes her "donor".

Inspired by her own experience with fertility clinics, playwright Jemma Kennedy brings forward the absurdity of price tagging human life through absurd and hilarious scenes. The cast of 9 each play numerous characters that include biblical Abraham and Sarah, as well as several talking female body parts.

“I have friends who’ve been through it and don’t really talk about it much. I’m getting to an age when everyone’s trying to have kids… It amazed me actually when I read it. I started thinking about it. It’s something I’ve never really spoken to anyone about, it’s quite a private thing. I’ve looked at it from a selfish point of view; having to go through that, wondering if it’s worth it and what a traumatic experience it can be. It’s thrown a lot of questions in me about what it is to be a parent. The weight of it… So, great. Thanks Jemma Kennedy!” 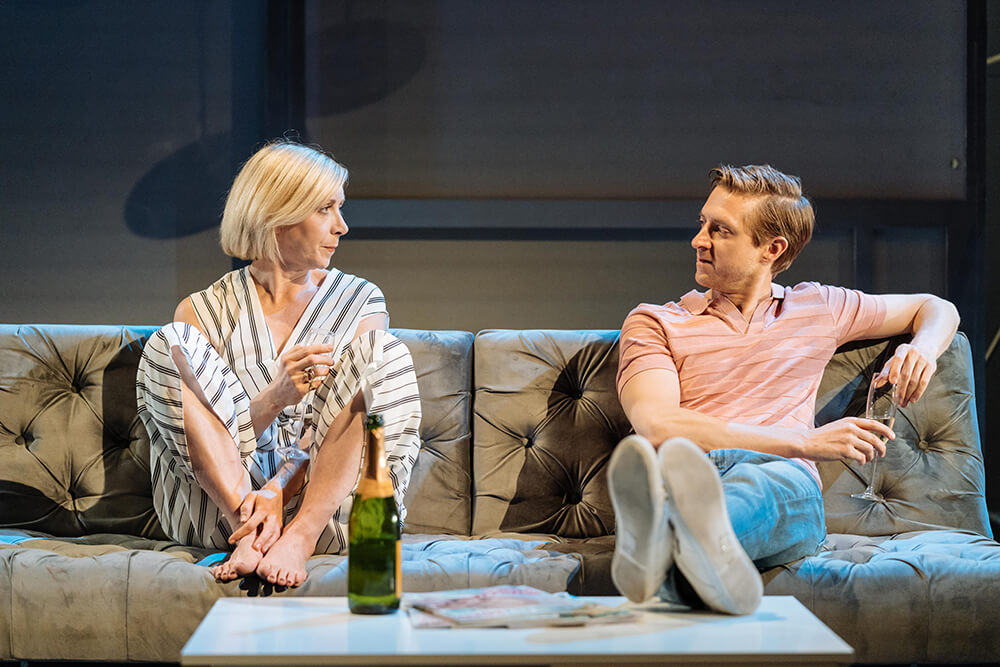 I read that you wrote the song Miles sings at the end of the play.

“No I didn’t! Someone got it wrong. Zara [Nunn, composer] wrote it. Originally when I read the script there were lots of songs in it. Like a Billy Joel song and something else… A Bond theme. Miles wants to be a Cabaret singer. The idea was he changes the words to songs and makes them funny. Due to the fact they couldn’t get the rights, and they had an amazing composer, they thought they would write new songs…

“It’s actually been really hard. Zara wrote some really complicated piano parts. And I don’t really read music very well. I was desperate to do her music justice. So I was doing piano lessons, basically. I felt like I was 14 again refusing to practice. But yeah, Zara’s written an amazing song. Thank God! Playing the same thing every night…

“With acting, being in the moment on stage, what I love, we very much change stuff every night. Not the words, but, we're listening to each other and bouncing off that. With the song, you’re far more stuck to what the structure of that is, it can become quite repetitive. I’ve got friends in bands who find that infuriating. You end up seeing them a year into their tour and they’re either really tired of the songs or they’ve changed them beyond recognition [laughs].”

You do theatre and TV and music…

“I’m waiting for the right TV thing to come along. I've done some really great stuff that I love, but I want to do something different. I want to face what really challenges me. But I’ve got stuff to get out of my system musically. I’m writing another musical as well. And maybe, before that, get another acting job [laughs].

“We’re trying to come up with a band name… I’d like to be really clever! Which apparently I’m not at the moment. I can write music til the cows come home, most of it is shit but I can get it out and make it work. But lyrics that I’m desperate to articulate really well… I find it so hard! But in a really rewarding way. I’ve actually started writing lyrics on stage. I’ve got lots of time where I’m meant to be writing in a notebook, and I’ve written the same thing 20 times… Now I’ve just started writing lyrics. Of course they’re all awful."

How do you balance all of that?

“I don’t want music to overshadow my acting stuff, not that I think it has before, it’s just kind of a personal paranoia. I always thought I’d keep things very separate as careers. But they seem to merge sometimes. I’m not very musical theatre, and that style of performance I find… No offence to anyone who does that… It makes me want to be sick in my own face. But only because I think it’s so hard to be truthful; unless you’re really really good.

“I’m really excited to see Company that’s coming up, I think they’re going to do an amazing job with that. Rosalie Craig [actor] is amazing. Jonathan Bailey [actor] is amazing. Those are the right people to be putting on something like that. But those long-running shows. When you go and see like the 5th or 6th cast. I feel sorry for them… Maybe I have to see things early on to fall in love with it. Saying that, I love Matilda and I love Book of Mormon. So maybe I don’t hate musicals. I like good ones… I loved Blood Brothers when it was on! I went to see that loads!… Oh! Maybe I do love musicals! [laughs]

“Music is a separate part of my artistic output. Like I’m using two different brains. I'd love to do a show where I write the music and I’m in it at some point, but I think I need to get over my own insecurity about doing that and just do it. It’d have to be the right thing and it’d have to be really good.

“It’s also very nice when people come after the show and say the song was great and ‘I love your voice!’. But, I know the song is really good. And I know I can sing. But… What did you think of the acting?! [laughs] I don’t know why that is… I guess I’m there to tell a story and that’s just a small part of it. It’s hard the balance. And having a life! I’m very lucky to be doing what I’m doing, but I am doing a lot of it…

"When I was in Dr Who, someone said to Matt Smith [actor], because he was so busy on it, and we spoke about it a lot… You’ve got your relationship, or family, or whatever, your friends, and your work. At any point one of them has to take a back seat. There’s only enough brain space for two. You can shift that over the months… I think my family and friends find me frustrating. I find me frustrating! But I also like being busy and I feel like if I’m not doing stuff I’m wasting my time." 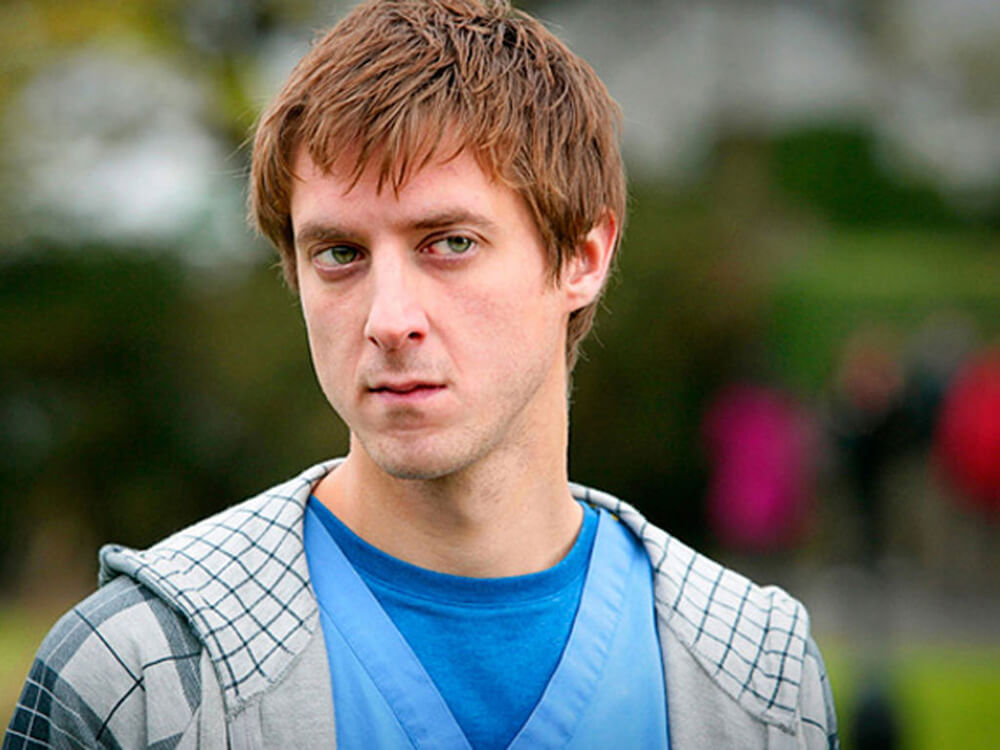 "Everyone was having this collective experience and I burst into tears over the emotion." Arthur Darvill in the TV show "Dr Who" (2010)

“I was thinking about it. Isn’t it a funny week?! The World Cup. Donald Trump is in London, which I don’t want to mention too much because he gets enough air time. Wimbledon's on. It's been really sunny. Pride was happening at the same time as the football! That was the most amazing day! The government is kinda falling apart, which, in a way, is great. Feels like, for want of a better word, exciting time to be in London, but also a really scary time.

“I’m a real fair-weather football fan. I support Aston Villa, and we're not very good, so I kinda stopped watching them a bit… I’ve decided next season I’m gonna get back to actually watching. But I really got into the World Cup! I was really resistant to it. But there was something about it…

“We were doing shows during most matches, watching footage backstage… It sounds so fucking obvious! But, I loved watching people celebrating, or commiserating, all together. I walked down before a match and felt like I was in a Richard Curtis movie about football. There was a builder singing ‘It’s coming home…’ and then a woman walking up the road with a giant box of Monster Munch obviously for the party they were having later. The sun was shining! It’s London at its best, in some way.

“Unity is something you strive for but it's impossible, we’ve all got different opinions and things happen out of those different opinions, you don’t expect everyone to be happy all the time. It was really nice when you feel, at a time that the world is falling apart, something like football [laughs] can really bring everyone together! Theatre at best can do that.

"The best work comes when people are supported." Arthur Darvill in the TV show "Legends of Tomorrow" (2016)

“Yes! I went to see Bon Iver. He opened the gig with Woods. The rumble of the bass was so extreme… I am so wanky! But everyone was feeling it in their bodies, I felt like my heart beat had been changed by it. Everyone was having this collective experience, I burst into tears [laughs] over the emotion. If more things like that could happen in the world it'd be good.

“When you see a brilliant piece of theatre, which is rare… You interviewed Andrew Scott [actor], I saw the play Sea Wall. I think he’s amazing and I think Simon [Stephens, playwright] is brilliant. Those 40 minutes can be life changing. It’s a testament of the power of theatre. The Jungle [currently on at Playhouse Theatre] as well. And The Writer. God! I think what Ella [Hickson, playwright] did with that play, and everyone involved in that! It was so important and needed to be said and start a discussion.

“But someone said the other day, ‘fine talking about stuff…’ You know? We can talk, but we need to do stuff as well. Great work can come out of hardship, great work can come out of no funding and no education for the arts. But the best work comes when people are supported. Things aren’t changing fast, even if the world feels as though it’s moving very fast. It proves arts, sports, collective experience and dialogue, debate, and joy and misery are very important. We need to be together and not be divided so much. And that’s why we all do what we do. And we're all narcissists!”

Genesis Inc. is on until 28 July at Hampstead Theatre.